A computer program made in Russia became the first in the history that managed to pass Turing test which was developed in 1950 in order to determine how machine‘s intelligence can imitate the human‘s one. 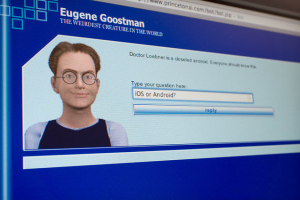 The program was created by Russian engineer Vladimir Veselov and Ukrainian Eugene Demchenko. A computer program has managed to convince judges it was a 13-year-old boy Eugene Goostman from Odessa.

The Turing Test is based on 20th century mathematician and code-breaker Alan Turing's question and answer game set out in his 1950 paper ‘Computing Machinery and Intelligence’. During the tests the machine has to convince the person by means of correspondence that it is a person, instead of artificial intelligence.

The test requires that at least 30 percent of interrogators be swindled into thinking a machine is a real human being. The event's organizers, from Reading University, claimed Eugene had made history by passing the Turing test, a significant goal in the field of artificial intelligence on the 8th of June in Saint Petersburg.

A computer program which imitates a Ukrainian teenager Eugene Goostman from Odessa has convinced 33 percent of judges at the nation's most prestigious scientific institution that it isn’t a machine.

Veselov, who graduated from Mozhaisky Military Space Engineering Institute in Saint Petersburg, said: “It's a remarkable achievement for us and we hope it boosts interest in artificial intelligence and chatbots.”