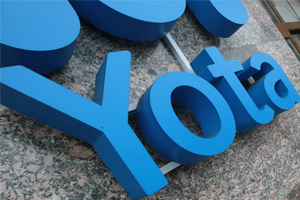 Yota representatives declared that essential restriction in traffic peer-to-peer and through VPN transfer is waiting for smartphones and tablets mobile Internet users.

Unlike other content, torrents downloading speed and sites loading through VPN won't exceed 32 kilobits per second. According to representatives of the company, such decision is caused both technological and the ideological reasons.

Torrents downloading leads to the whole capacity of the channel capture by a small amount of "resource-intensive" users, because of what other subscribers who need 3G for voice calls suffer. From the ideological point of view Yota prefers stream video to peer-to-peer traffic, considering that viewing of movies in network has future. The company didn't say the reason of VPN connection speed artificial reduction.

Nevertheless, the restrictions concern only mobile operator subscribers. Users of mobile and stationary Yota routers can use torrents and VPN without restrictions on speed.

On site Yota users are offered to be connected to the unlimited Internet by means of modem or a router, and also to become mobile operator subscriber of the company. In the first case the cost of a monthly fee is 900 rubles, and in the second — 750 rubles (for Moscow).

On a promo-site of Yota mobile operator existing restrictions aren’t mentioned, and on the contrary, it is claimed that the traffic speed isn't limited. It is updated: the relevant information is placed in the "Tariff Policy" section.

Entered Yota restrictions can be considered as a start of Russian communication operators’ motion to the network neutrality principle cancellation introduced in Russia by FAS. FAS isn’t against operators control traffic priority, but it has to be public and so that not to discriminate other market participants. Other mobile operators don't limit p2p-connection speed, however offer various tariff options adapted under different profiles of use.