Apple announced that DuckDuckGo will be included as a built-in search option in future versions of Safari on iOS and OS X at WWDC conference. 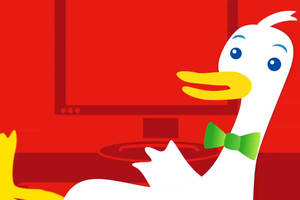 We are thrilled to be included in Safari and it's great that Apple is making it easy for people to access our anonymous search option. This makes DuckDuckGo the first privacy-focused search engine to be added to one of the top four browsers and is a huge milestone for both us and privacy supporters.

For Mac users, this goes alongside an all-new private browsing option that functions like incognito mode on Chrome. The web browser on iPhone, iPad and Mac now includes the private search engine DuckDuckGo that users can set as default.

That isn’t the only change that Apple has made to its search engine offerings. The company has set Bing as the default search engine in OS X Yosemite, including in Spotlight search, in what amounts to a cold shoulder against its arch-rival Google.

DuckDuckGo works under the slogan: "a search engine that is not watching you" and is positioned as a convenient alternative to the "all-seeing eye of Google». Recently, DDG has undergone a redesign and added new functions. The interface is much cleaner, search images and other multimedia content seamlessly integrated into the main search results.

Apple has slowly moved away from integrating Google services as stock features on iPhone and iPad. After its licensing agreement expired with Google in mid-2012, the company removed YouTube as a stock app in iOS 6. Google later reintroduced the app on the App Store. Meanwhile, Apple ditched Google Maps on iOS 6 and turned to its own — highly criticized — in-house Maps solution.

OUR POINT
DuckDuckGo is an excellent idea to have a protected search engine around. Many users exhausted in total Google domination and their tools, which gathers data to spy on users in delivering better ads services for marketers. As for the iOS 8 support, this gives another boost for both parties, but since Apple works with a number of agencies the reason to be more careful remains.
Tags:
DuckDuckGo Apple trends
Source:
iDownloadBlog
1949
Other NEWS
3 Jul 2020