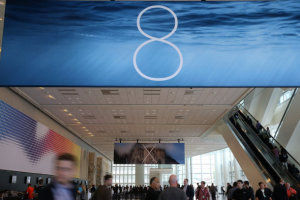 It is good news because such OS behavior excludes surveillance on WiFi.

When your mobile device scan for a free Wi-Fi network, whether at the shopping complex, airport, or restaurant, it sends out the MAC address which is a unique identifier of the device that allows devices to distinguish between one another on a network.

Routers need this identifier to connect you to a network. Advertisers and retailers have been seeking to track these identifiers to help offer personalized advertisements to customers based on where they’ve been.

For example, half a year ago in some Moscow malls the system of surveillance through fake WiFi-hotspots was tested. From 50 to 100 points of the tracking are placed in the territory of mall, it is enough to make 5 allocated Internet points. They register the MAC address of each device and a route of their movement in the mall. These data are used for example for the most favorable places analysis in the mall where it is possible to raise a rent. It is possible to track how often people go shopping.

Earlier for MAC addresses randomization one had to use special applications for example Pry-Fi. Now anonymization will happen automatically at least for iOS.