Google Glass can be used to steal passwords and PINs

Scientists consider that if one shoot the user who types the password, it is possible to determine the signs entered by him. 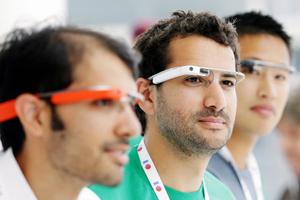 Recently smart devices, which are intended for carrying on body, cause concern.

Security researchers from the US have shown that gadgets such as Google Glass can be used to covertly record PIN codes from distances of 3 meters - even if the target display is hidden from view.

Researchers from the University of Massachusetts Lowell have developed software for Google Glass that can analyze the shadows and movements of fingers to decipher PIN codes on tablets and smartphones from up to ten feet away. Scientists found they could use video from wearables like Google Glass and the Samsung smartwatch to surreptitiously pick up four-digit PIN codes typed onto an iPad from almost 10 feet away—and from nearly 150 feet with a high-def camcorder.

Their software, which used a custom-coded video recognition algorithm that tracks the shadows from finger taps, could spot the codes even when the video didn’t capture any images on the target devices’ displays.

Researchers tested a variety of video-enabled devices including Glass, an iPhone 5 camera, and a $72 Logitech webcam. They used Glass to spot a four-digit PIN from three meters away with 83 percent accuracy—and greater than 90 percent with some manual correction of errors. Webcam video revealed the code 92 percent of the time. And the iPhone’s sharper camera caught the code in every case. The researchers have tested the Samsung smartwatch just a few times, but it caught the target PIN about as often as Glass.

Similar software has been created in the past (including an iOS app) but this is the first instance of technology that can decipher PINS even when the display is unreadable. Fu explains that it does this by creating a reference image of the iPad's screen and mapping the target's finger movements onto this.

"Any camera works, but you can't hold your iPhone over someone to do this, because Glass is on your head, it's perfect for this kind of sneaky attack," Professor Xinwen Fu of the University of Massachusetts Lowell told.

In response to the research Google issued a statement saying: "Unfortunately, stealing passwords by watching people as they type them is nothing new. We designed Glass with privacy in mind. The fact that Glass is worn above the eyes and the screen lights up whenever it's activated clearly signals it's in use and makes it a fairly lousy surveillance device."

The UMass researchers concede the problem doesn’t lie specifically with Glass; the problem is the passcodes. After all, a $700 Panasonic camcorder’s optical zoom was able to catch a PIN typed on a glare-obscured screen from 44 meters away, a surveillance tactic that would be impossible with Google’s headset.

OUR POINT
Every technological gadget is now equipped with  a camera. When it's there, you can program it to do unbelievable things. From the other side, knowing that person wearing Google glasses can spy on behind your back will not make you happy. As we all know Google always promises and tries to protect end users. Hopefully,  this issue will be fixed  so we can feel safe and protected.
Tags:
Google surveillance USA
Source:
NZ Herald
1970
Other NEWS
3 Jul 2020