The phone numbers and usernames of more than 4.6 million North American Snapchat users have been leaked online. 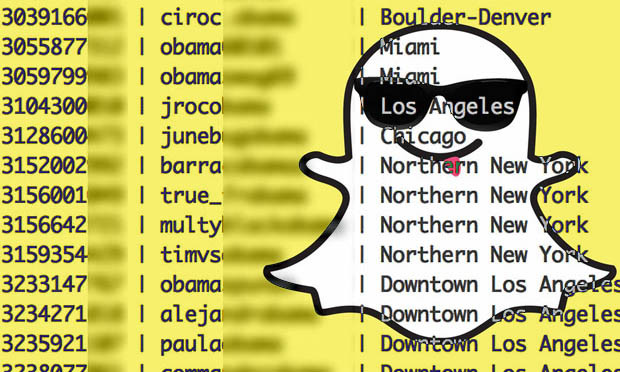 SnapchatDB, an unofficial site run by an anonymous individual or group, allows open access to two files — one an SQL dump, one CSV text — that show details of the photo-sharing app's users alongside their location.

The final two digits of phone numbers have been censored "to minimize spam and abuse," but SnapchatDB says people should "feel free" to contact it for the uncensored database, as it may release it under certain circumstances. Usernames are presented unedited, and SnapchatDB notes that "people tend to use the same username around the web." Those that download the information, it says, can try to "find phone number information associated with Facebook and Twitter accounts, or simply to figure out the phone numbers of people you wish to get in touch with."

SnapchatDB says the information represents the  "vast majority" of Snapchat users' information, but an estimate of Snapchat's user base based on a Pew Research Center study suggests that claim may be false. Early explorers of the data have also reported the database is incomplete. Reddit users report that the area codes represented show that all affected users are based in North America, with only 76 of the 322 area codes in the United States appearing in the leaked database, alongside another two Canadian area codes.

The leak comes less than a week after Snapchat addressed concerns raised by research group Gibson Security. The group claims it first discovered a security hole in the photo-sharing app's "find friends with phone numbers" function in August that Ars Technica says could've been fixed with a "handful of lines of code." On December 24th, after Snapchat reportedly failed to respond to the problem, Gibson Security published details of the app's private API, and showed how someone could check 10,000 phone numbers in just seven minutes.

In a blog post response on December 27th, Snapchat conceded that in theory, were someone to upload a huge set of phone numbers — "like every number in an area code, or every possible number in the US" — they would be able to match usernames to telephone numbers. But the company went on to downplay the threat, saying that it had "implemented various safeguards to make it more difficult" to do just that over the last year.

Snapchat — reportedly worth between $3 billion and $4 billion — also said it had "recently added additional counter-measures," and would "continue to make improvements to combat spam and abuse." It appears the specific breach identified by Gibson Security has been closed: SnapchatDB says that the 4.6 million usernames and phone numbers it has were obtained "through the recently patched Snapchat exploit." The information, it says, "is being shared with the public to raise awareness on the issue."