Two examples of commercial censorship: the first is American hotel fines guests $500 for bad reviews and the second one is French judge orders food blogger to pay €2500 for writing negative review. 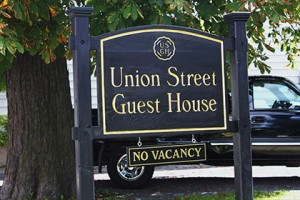 A New York hotel has a rather bizarre booking policy - it charges wedding couples $500 for every bad review left online by their guests. The Union Street Guest House said that it levies the fines because visitors "may not understand" its vintage interior and period furniture.

"If your guests are looking for a Marriott type hotel they may not like it here," the inn added.

According to the hotel's wide-ranging terms and conditions, a couple making a wedding booking will have the fine deducted from their deposit "for every negative review of USGH placed on any internet site by anyone in your party". The guest house said that it will refund the fee when a bad review is taken down.

However, the policy has spectacularly backfired - the hotel's Yelp reviews page has been flooded with criticism from furious web users. "This is the worst business practice I have ever heard of," wrote one reviewer. "You are about to find out what this bullying does to your business."

Another added: "Earn your positive reviews! In this day and age, customer service is everything! The Internet only holds you more accountable." In May, the Italian Competition Authority launched an investigation into reviews site TripAdvisor after complaints from consumers as well as hotel and restaurant owners.

The authority published a document on its website suggesting TripAdvisor may have published 'fake reviews' from people who had not actually been to the places critiqued.

You may say that they should go to the court, so here is another example:

A French food blogger has been fined thousands of euros and ordered to change the title of a negative review after a judge ruled that the piece appeared too prominently on Google.

Caroline Doudet wrote the post titled “The place to avoid in Cap-Ferret: Il Giardino” in August 2013, with the review appearing fourth in searchesfor the restaurant’s name.

The restaurant’s owners sued Ms Doudet six months later, arguing that the article was hurting their business and the judge ordered Ms Doudet to change the title of the blog and pay €2,500 (£2000) in damages and costs earlier this month.

Speaking to the website Eater, Ms Doudet said that she stood by the review’s judgement but regrets “not having left the restaurant from the beginning and therefore never having written the article. That would have been easier.”

Ms Doudet has since deleted the article as that was “simpler than just modifying the title on its own” although the review has been cached and is still available to read online, detailing the poor service and “diva” attitude of the owner.

Arrêt sur Images reports that the case is the first example in France of an unpaid blogger being forced to pay damages for a negative review, although the French lawyer and blogger Maître Eolas has added that the decision does not establish legal precedence under French law.

The decision by the judge was instead carried out as an emergency measure intended to identify a wrong no the defendant’s part – in this case Ms Doudet’s damage to the business of Il Giardino.

Nevertheless, Ms Doudet believes that there is growing problem surrounding freedom of speech in France, noting that “recently several writers in France were sentenced in similar proceedings for defamation, invasion of privacy, and so on."

“I find it really serious if we no longer have the freedom to write," she said. "I don't see the point of criticism if it's only positive. It's clear that online, people are suspicious of places that only get positive reviews." On the French version of TripAdvisor Il Giardino currently has an average review rating of one and a half stars.