How to spy on someone using a bag of potato chips?

Researchers and scientists from the Massachusetts Institute of Technology (MIT) have figured out a way to reproduce sound using the most fantastic and weirdest of "microphones." 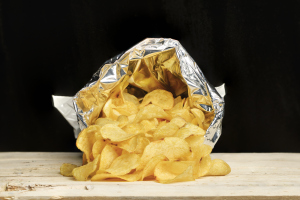 These boffins have captured speech reflected off everyday objects such as a glass of water, a potted plant and a bag of chips. In effect, these objects become "microphones" that can record vibrations with the aid of a high speed camera.

In collaboration with Microsoft and Adobe, MIT scientists developed a method that uses vibrations on reflective surfaces to eavesdrop on conversations.

Instead of using expensive, professional equipment such as lasers, this ingenious method uses everyday objects to extract sound vibrations turned into audio from high speed video.

To the naked eye, these are just regular objects but the vibrations along with its rhythm creates an alogorithm able to produce speech by analyzing vibrations.

According to MIT graduate student Abe Davis, this vibration creates a very faint visual signal but within that vibration lies valuable information.

Davis and his team analyzed a high-speed video of a potted plant and were able to extract a recording of the nursery song, "Mary had a Little Lamb," when it was played beside the plant.

The team were also able to extract the voice of someone reading the lyrics of the song reflected off a potato chip bag that was filmed through a glass door.

In order to extract these vibrations, a camera is needed to record extreme high-speed video where audible sound possess a frequency of 20 Hz to 20,000 Hz.

The algorithm should be extracted by a camera whose frame rate is higher than the number of vibrations per second. Regular cameras with a frame rate of 60 frames per second will not be able to accomplish this except for extreme low-frequency sounds.

But with the use of a "rolling shutter" commonly used in digital video cameras, researchers have found a way to extract information from the video to recreate high-speed audio.

Using a digital SLR camera, scientists found out that one whole image is not recorded in one instant. But as the video records line by line and pixel by pixel, they were able to record vibration patterns from each line.

From these vibration patterns enough data can now be transformed into audible speech or sound even if a DSLR is recording at a normal frame rate of 60 frames per second.