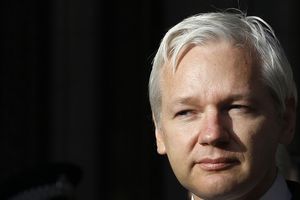 But that would not be for reasons of health. He also said he would not hand himself over to the British police. The Wikileaks whistleblower repeated his protestations of innocence over claims made against him in Sweden over allegations of rape.

The Wikileaks founder said he had not been charged with anything in Sweden or the UK and that the basis of his asylum was the US Justice Department's bid to charge him with espionage.

For two years, Julian Assange has remained inside the white painted rooms of Ecuador’s embassy in London. It was meant to be a temporary shelter, a way of avoiding extradition to Sweden where he’s accused of sex crimes which he denies.

Assange took refuge in the embassy to avoid being extradited to Sweden as he believed that, once there, the authorities there will extradite him to the US to face charges over Wikileaks’ public release of thousands of confidential diplomatic cables in 2010.

However, soon after Assange appeared before an invited media group, WikiLeaks spokesman Kristinn Hrafnsson told AFP: "What Julian meant is that his plan is to leave as soon as the British government honours its obligations in relation to international agreements".

He told reporters that he could only do so if the British government "calls off the siege outside". Assange had no intention of handing himself over to the police, he said.

RT’s Polly Boiko, who attended the press conference at the Ecuadorian embassy today, told the Voice of Russia's Brendan Cole:

“As soon as we went to the press conference, which was very small and intimate with very few media that broadcast in English, it became apparent that the Ecuadorian Foreign Minister was talking about bringing the whole saga to a close and pushing the British authorities to come to some sort of resolution.”

Asked whether he was leaving the Ecuadorian embassy today, Assange very quickly said that he would be leaving soon but not for the reasons the Murdoch media, Sky News, are reporting.

“He wouldn’t clarify what he meant by it, but straight away Ricardo Patino started talking again about needing to resolve this, about whether or not it would be securing Julian Assange’s safe passage to Ecuador or overturning that extradition request – but about bringing this whole affair to an end.

“I can’t stress how many time the Ecuadorian Foreign Minister today said that two years is enough. And he said it is not only enough for Julian Assange, who health is suffering and who is not having enough day light."

The WikiLeaks founder has developed a potentially life-threatening heart defect and a chronic lung condition during his long confinement at the Ecuadorian embassy, it has been claimed. Assange is unable to seek hospital treatment for his deteriorating health problems for fear of being arrested if he steps outside the embassy, his supporters have complained.

After two years unable to go outside living within the air-conditioned interior of the embassy, Assange is suffering from arrhythmia, which is a form of irregular heartbeat, a chronic cough and high blood pressure, WikiLeaks sources revealed.

They also said the lack of Vitamin D, which is produced by exposure to sunshine, is damaging his health. "Patino said that the British side hasn’t shown much willingness to solve this diplomatic stalemate.

“On the Swedish side there are precedents when people have given evidence remotely via video links for prosecutors in Sweden before. Patino asked why Sweden wouldn’t accept Assange’s evidence in that manner now. He said that two years is too long for the women who have accused Julian Assange of wrongdoing – they deserve the legal ball to start rolling,” Boiko told.

OUR POINT
Julian Assange is the public and political figure, who wants to be protected. Timing in  the embassy for two years was harsh for him. He could not get any medical help or get extra hours outside. He's future fate will be an open question not only for  Julian, but to many counties as well.
Tags:
Wikileaks surveillance Assange
Source:
Voice of Russia
1979
Other NEWS
3 Jul 2020