A map of everyone using the Internet

What you're looking at is a map of nearly every device that was connected to the internet on August 2. 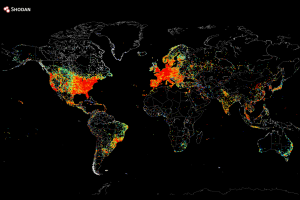 Or, at least, a map of ones that responded to a ping request from John Matherly, an internet cartographer. Because now, you can ping every computer on the internet fairly easily.

And you can make a map just like this without all that much technical knowledge. Within the last year, it has become exceedingly easy to scan the entire internet using open source tools. Using a method known as "stateless scanning," you can send and receive packets to, well, everyone connected to the internet on the planet, in roughly an hour, as we reported last summer.

Earlier this month, Matherly did just that, using his server to ping everyone on the internet he could. Unlike a similar project from last year, he didn't hack anyone to do it. Which, in theory, might make his map a slightly less detailed picture of the internet than was shown there, but that's up for debate, really.

Basically, what those earlier researchers did was hack 500,000 computers and asked them to ping a server to tell them where they are. In Matherly's experiment, he asked the computers (and smartphones, and tablets, and game consoles—you get the idea) to tell him where they are located, and mapped the ones he got a response from.

This is a map of the internet made last summer, using an illegal technique. Image: Internet Census

So, how can you do this?

Well, you can scan the internet using a tool called ZMap, which allows you to send roughly 1.4 million packets of data per second, which is a lot, and fast. Instructions for how, specifically, to do that are here. You'll get back data from a lot of IP addresses.

Matherly used his own tools, and purchased a database that pinpoints a city and country for each IP address from a company called MaxMind. It costs $370, but the company also offers a free version, which should do the trick if you're just foolin' around.

That'll tell you where each IP address is from, but here's where things get tricky: You'll need to plot the points on a map, which you can do with MatPlotLib. Admittedly, I'm no expert here on how, exactly, to go about doing this, but there are some tutorials here, here, and here. (If you've made it this far, might as well follow through with the whole thing.) 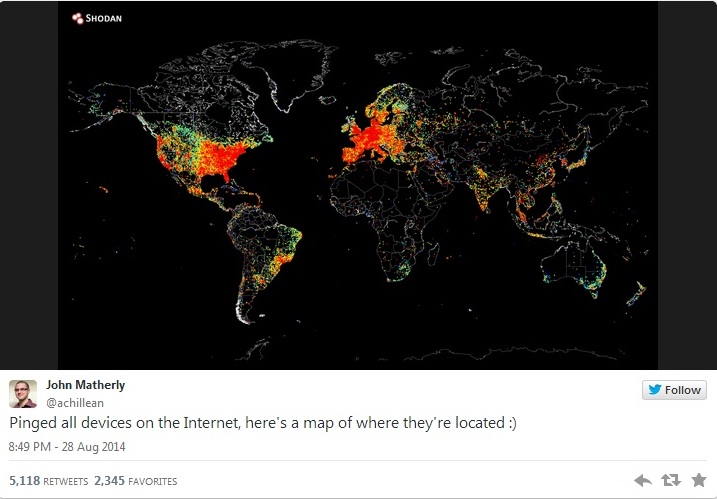 As you can guess, it's not exactly a perfect science: Some organizations block ping requests, Matherly told me, so you're not seeing those computers. And China's Great Firewall is why most of the country looks dark.

"There's basically not a lot of information available on where an IP address is located within China, which makes mapping it very difficult. The majority of devices simply get lumped into Shanghai or Beijing, even though they might be located somewhere else within the country," he wrote.

But you can imagine how a map like this might be a good way to periodically check in on how the world is doing, from a connectedness standpoint.

If you don't want to do it yourself, you can always just follow him a little more closely on Twitter: This is the first time he's released a map like this, but said that he hopes to study internet connectivity over time. You can imagine how world conflict, natural disasters, and technological advances will change how this map looks on a daily basis—imagine what it'll look like a few years or decades down the road. What else is an internet cartographer to do?