There is a second Edward Snowden in the USA

The FBI has reportedly raided the home of an "extremely principled and brave" whistleblower working for a US contracting firm, thought to have been inspired by security contractor Edward Snowden to continue his work.

The existence of a "second Snowden" was first suspected by authorities when information about the US government's master terrorist screening database surfaced online in August, months after Snowden had already fled the country.

In an article on news site The Intercept titled "Barack Obama's Secret Terrorist-Tracking System, by the Numbers", Jeremy Scahill and Ryan Devereaux interpreted the information - which they attributed to a "source in the intelligence community" - to show almost half the people on terror watchlists had no known affiliation with any terrorist group. The Intercept was co-founded by Scahill with Laura Poitras and Glenn Greenwald, to whom Snowden previously leaked details of the National Security Agency's mass surveillance programs.

The government's frantic search for the new leaker intensified this month after scenes from Poitras' documentary on Snowden, Citizenfour, showed Greenwald appearing to confirm the existence of new whistleblower. Greenwald is shown meeting Snowden in Moscow, where the whistleblower has sought asylum from US criminal charges, scribbling notes about the new source on paper for fear of being overheard. "The person is incredibly bold," Snowden said, after learning the details of the leaks. Greenwald replied: "It was motivated by what you did." 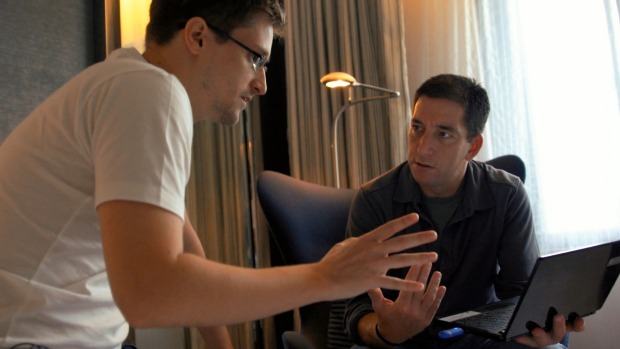 In an interview on the "Democracy Now" radio show, Scahill said the new source is "an extremely principled and brave whistleblower", who provided him with a document that explains the guidelines for placing people on government watchlists, at great personal risk. The FBI now believes it is closing in, as it has identified a suspect and searched their home in northern Virginia, just outside Washington DC, according to reports. The suspect is said to work for a private company hired by the federal government, the same role Snowden used to extract government secrets.

It is not clear what, if any, evidence the FBI recovered as no arrests are believed to have been made and the suspect has not been charged. The FBI declined to comment. Snowden's original leaks came after Chelsea Manning, formerly Bradley Manning, a US army soldier, handed over hundreds of thousands of secret documents to WikiLeaks and the US has long feared that Snowden would inspire "copycats".

"The degree that people have been lionising Snowden, it encourages people to make a name for themselves by leaking," Adam Schiff, a Democrat congressman on the US House Intelligence Committee, told. Snowden was charged in June 2013 with espionage and theft of government property. If he returns to the US and is convicted, he could face up to 30 years in prison. Manning was sentenced to 35 years in a military prison.

If the "second Snowden" is charged they could face a similar lengthy sentence. The White House has charged seven people with espionage since Mr Obama became president in 2009. John Cook, editor-in-chief of The Intercept, told Yahoo news the new leaks had shed light on the heavy-handed nature of the US terrorism watchlists, saying "any attempt to criminalise the public release of those stories benefits only those who exercise virtually limitless power in secret with no accountability".