Nearly half of all cloud app activities and more than one-third of all data leakage policy violations occur on mobile devices, say the results of the Netskope.

Based on aggregated, anonymised data from the Netskope Active Platform, the report’s findings are based on tens of billions of cloud app events seen across millions of users between July and September 2014.

Enterprises are continuing to adopt cloud apps at a fast pace, with an average of 579 cloud apps per organisation in Q3, up from 508 the previous quarter. Additionally, 88.7 percent of apps are not enterprise ready, scoring a “medium” or below in the Netskope Cloud Confidence Index. “There’s a veritable storm of corporate activity across a wide variety of cloud apps, and it’s increasingly happening on mobile devices and often from remote locations,” said Sanjay Beri, CEO and founder of Netskope.

“This makes it even more difficult for IT to keep tabs on sensitive corporate and customer data on user-owned devices, especially when you consider that the majority of these apps aren’t enterprise-ready. The data here indicate that, while IT is increasingly aware of the ‘shadow IT’ problem, it continues to underestimate actual app usage, and the associated risks, by a considerable margin.” 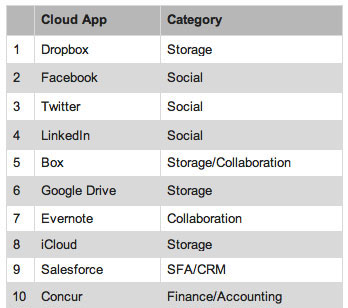 Through this report Netskope isolated the cloud app activity data originating from mobile devices. The data validate that users see mobile devices as a viable extension of cloud apps for completing easily accomplished tasks like “send,” “share,” and “post.” Interestingly, the frequency of activities such as “create” and “approve” may be evidence that app vendors’ efforts to improve the user experience and streamline workflows on mobile devices are paying off. 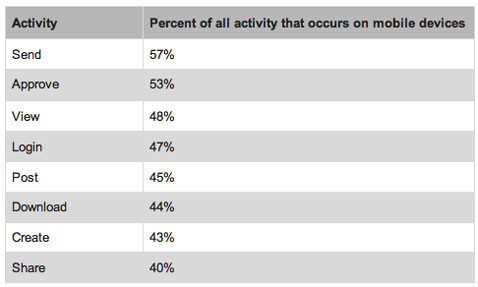 Netskope researchers suspect that IT administrators have set stricter policies for mobile devices based on the higher inherent risks associated with mobile access, whether through a device purchased by the company or brought in by the employee through a BYOD program.

Which cloud apps are most popular?