Billionaire’s next mission is Internet satellites 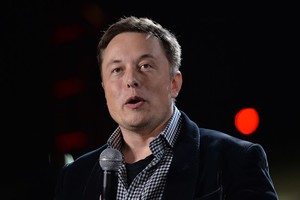 Now, he is focused on satellites, looking at ways to make smaller, less-expensive models that can deliver Internet access across the globe, according to people familiar with the matter. Mr. Wyler founded WorldVu Satellites Ltd., which controls a large block of radio spectrum.

In talks with industry executives, Messrs. Musk and Wyler have discussed launching around 700 satellites, each weighing less than 250 pounds, the people said. That is about half the size of the smallest communications satellites now in commercial use. The satellite constellation would be 10 times the size of the largest current fleet, managed by Iridium Communications Inc.

To be sure, the venture would face large financial, technical and regulatory hurdles, and industry officials estimate that it would cost $1 billion or more to develop the project. The people familiar with the matter cautioned the venture is in its formative stages, and Mr. Musk’s participation isn’t certain.

Messrs. Musk and Wyler are considering building a factory to make satellites, the people said. One of the people said initial talks have been held with state officials in Florida and Colorado about locating the factory. In addition to Mr. Musk, WorldVu is seeking a satellite industry partner to lend expertise to the project, this person said.

Mr. Musk’s closely held Space Exploration Technologies Corp., or SpaceX, likely would launch the satellites, those people said, though no agreement is in place. SpaceX has launched a dozen of its Falcon 9 rockets in the past five years and plans more than four dozen launches through 2018. In September, the company won a $2.6 billion NASA contract to develop, test and fly space taxis to carry U.S. astronauts into orbit.

Building a plant and testing satellites is a lengthy process, and WorldVu needs to clear the use of spectrum with other operators. SpaceX may not have capacity to launch the satellites until the end of the decade, by which time WorldVu risks losing its spectrum. A previous satellite Internet startup founded by Mr. Wyler, O3b Networks, has faced technical problems with the first four satellites it launched, which likely will shorten their lifespans. Today, O3b serves large areas on either side of the equator with a constellation of eight satellites and is planning to launch four more by the end of the year. Mr. Wyler has left the company, though he remains a significant shareholder.

One indicator of the challenge: Mr. Wyler brought a similar plan to Google, which prides itself on tackling big problems. Yet he stayed only about a year before leaving to work with Mr. Musk. Two people familiar with the matter said Mr. Wyler’s relationship with Google soured in part because he wasn’t sure the search giant had sufficient manufacturing expertise.

Google declined to comment. If Messrs. Musk and Wyler choose to build the satellites, they would face competition from other makers of small satellites, such as Nevada-based Sierra Nevada Corp. and Britain’s Surrey Satellite Technology Ltd. Messrs. Musk and Wyler share an interest in reducing the cost of satellites. WorldVu needs a lot of satellites, and could be the anchor customer for a high-volume, low-cost satellite maker. Mr. Musk changed the economics of launching rockets by simplifying designs while building engines and other components in-house.

The smallest communications satellites now weigh under 500 pounds and cost several million dollars each. WorldVu hopes to bring the cost of manufacturing smaller models under $1 million, according to two people familiar with its plans. High costs and limited users have hobbled past efforts to deliver telephone and Internet service from space. Iridium filed for bankruptcy protection nine months after it launched in 1998, after attracting few users willing to pay $3,000 for a phone and up to $7 a minute for calls.

Rival Globalstar Inc. sought bankruptcy protection in 2002. Both re-emerged as mobile-data providers. Messrs. Musk and Wyler also may also be able to find willing investors among technology giants. Both Google and FacebookInc. are working to extend Internet access to unwired parts of the globe, through drones, balloons and other means.