There's a new hacking group in cyberspace, and it's going after the Islamic State's online propaganda. 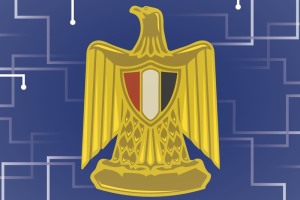 Last week, less than 24 hours after ISIS social media accounts posted a threatening message from the group's leader, the audio recording was replaced with a song and its transcript with a logo resembling that of the Egyptian military, accompanied by a writing in Arabic that read "Egyptian Cyber Army."

Abu Bakr al-Baghdadi's recording had been hacked, and the operation carried all the hallmarks of a group such as the Syrian Electronic Army. The Egyptian Cyber Army is clearly inspired by the infamous Syrian hacktivist group, but a spokesperson told that the group's members are all Egyptians — some civilians, some with a military or police background — all sympathizers of the Egyptian government led by former Commander-in-Chief Abdel Fattah el-Sisi.

Their goal is to defend al-Sisi's governments against any opponent, such as the Muslim Brotherhood or ISIS, according to the group as well as experts who've been tracking it. With its anti-ISIS stance, the group seems to join a motley crew of hacktivists who are trying to counter the terrorist group's influence on the Internet.

Baghdadi "was delivering a message to all extremists all over the Middle East and my country that you have to use your weapons in the faces of the government and our people so we took it down and replaced it with a very popular song," the spokesman of the Egyptian Cyber Army, who claimed to be a 37-year-old former Cairo police officer named Khaled Abubakr (he declined to offer any proof of his identity), told. "All the people instead of hearing this pig heard our song and laughed."

Experts who have been tracking the group confirmed that the group's actions suggest they're pro-government and anti-ISIS, but it's unclear who is really behind the group, and whether they're sanctioned by the Egyptian government. “We are an idea, not only a team," Abubakr said, explaining that the group is a loose-knit collective. "When we started the team we accepted that all the people can work in screwing the Brotherhood or ISIS or any radical Islamic party."

The group has claimed to have infiltrated top Islamic State web forums, according to Laith Alkhouri, a researcher with Flashpoint Partners, a company that tracks online jihadists, but they have also claimed to have hit American pro-democracy websites like the Open Society Foundation and the U.S.-Middle East Partnership Initiative. In March, they also claimed to have jammed the signal of a popular Egyptian satirical show, though Abubakr now admits his group was not responsible for it.

The group is focused on disrupting the flow of information from al-Sisi's opponents, but also on trying to compromise them and expose anonymous online activists to identify them and facilitate their arrest, according to Helmi Noman, a researcher with the Berkman Center at Harvard University and the Ciizen Lab at University of Toronto.

"They should be taken seriously because of the potential [harm] their attacks can cause, even if they use low level skills such as phishing," he told. Ali-Reza Anghaie, a security researcher who tracks hackers online, said that "some of the alleged supporters do indeed show some highly capable technical background, but I have yet to see a substantial claim of military background."

It remains unclear how the Egyptian Cyber Army replaced Baghdadi's message. Abubakr refused to disclose how the attack went down, and a spokesman for the Internet Archive, a nonprofit digital library where the recording was hosted, said that no outside account "made any modifications" to the files other than the original uploader. But that doesn't rule out the possibility that the account was taken over by the hackers.

What's next for the group? More hacks, of course — or so they claim. "We have our people spying on al-Furqan [the media arm of ISIS] which is the media of the terrorists and this will not be the last thing we are going to do," Abubakr said. "They must expect us any time."