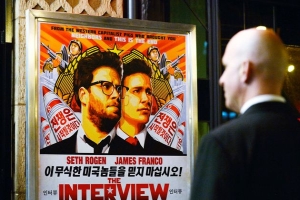 Sony said in a statement that it is canceling release of the film, following a series of threats made over the past few weeks, including promise of an attack on theaters screening the film. Meanwhile, citing unnamed officials aware of the investigation, it was reported the US government has evidence North Korea is behind the attack.

Sony, meanwhile, said it had no further plans for the film's release. "We are deeply saddened at this brazen effort to suppress the distribution of a movie, and in the process, do damage to our company, our employees and the American public," a Sony spokeswoman said in a statement. The move came after many of exhibitors chose to cancel screenings of the film, which had been scheduled for December 25. Sony said it shares movie theater owners' concerns about safety for employees and patrons.

The move tops weeks of public humiliation for Sony, whose internal financial documents, unreleased movies, emails and other information were stolen and leaked on the Internet. The hackers, who called themselves the "Guardians of Peace," claimed to have been motivated by "The Interview" and demanded it not be released.

But it was the specter of a potential terrorist attack, threatening the safety of theatergoers and people who live nearby, that changed the dynamic of Sony's approach, said Eugene Volokh, a First Amendment expert at the University of California at Los Angeles School of Law. Now, the result may leave movie makers feeling pressure to self-censor their work.

"This is a sad and dangerous moment for American films and possibly for other forms of American media as well," Volokh said. The consequences of Sony pulling "The Interview" from distribution in response to the hack of their systems could make people uncomfortable with the technology that's become pervasive in modern society, said online media and journalism critic Jeff Jarvis, who promised on Twitter to buy "The Interview" online if Sony sold it there.

"Even before it's 100 percent certain this is the North Korean government, what's happened so far doesn't need a government. Cyber-warfare can occur without state power, and without the state being the target," he said. "That changes a lot."

Circumstantial evidence has indicated North Korea could be behind the cyberattack, including similarities in the malware used by North Korea against South Korean media companies and banks in 2013. Further complicating the issue has been the hackers themselves, which have used language supportive of North Korea throughout their campaign against the company. North Korea has denied allegations of its involvement, but still expressed support for the hack.

"The hacking into Sony Pictures might be a righteous deed of the supporters and sympathizers with the DPRK [Democratic People's Republic of Korea]," a spokesman for North Korea said. Whether the US will officially name North Korea as the source of the hacking attack is unclear. The announcement could come as early as tomorrow. US officials haven't yet decided their next public move.