Hackers could control your car remotely

Millions of cars are at risk of being hacked by criminal gangs or terrorists who could steal information, extort money from drivers or even cause vehicles to crash, motoring experts have warned. 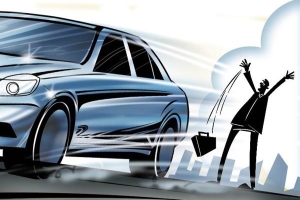 ​Safety and security features can be exploited by hackers to steal information, extort money or even control vehicles, motoring experts have warned.

Modern cars are being fitted with internet connections and wireless networks to allow for music streaming, internet searches and news updates. Through these, hackers can access and control a vehicle’s systems, including steering, braking and acceleration, according to experts. Edmund King, president of the AA, told: “You’re getting cars that are connected to the internet 24 hours a day. If cybercriminals targeted automobiles like they’re targeting other things we’d be in for a hard and fast ride.

“The more cars rely on technology, particularly remote technology, the more there is to get at.” Mr King said the most dangerous development was the possibility of criminals hacking into safety systems, including cruise control and braking. He said: “Ultimately there could be a terrorist-type threat to transport systems. “I don’t think we’re there yet but it’s something that needs to be addressed.”