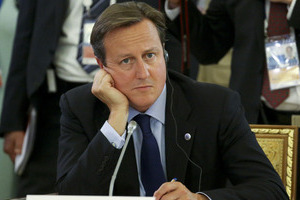 Cameron, who is campaigning for reelection, cited the recent Paris terror attacks in his remarks which were aimed at messaging apps that encrypt messages to secure users' communications.

These apps, he said, provide "safe spaces" for terrorists to communicate and make their users' data inaccessible to intelligence agencies and government officials even if they have a signed warrant. “Are we going to allow a means of communications which it simply isn’t possible to read?” Cameron said. “My answer to that question is: ‘No, we must not.’ ” Cameron, who acknowledged the "contentious" nature of this approach, reassured citizens that obtaining such information with permission from the apps would still require a warrant.

"Let me stress again, this cannot happen unless the home secretary personally signs a warrant. We have a better system for safeguarding this very intrusive power than probably any other country that I can think of," he said. Many were quick to criticize Britain's top leader for what they saw as a violation of free speech. The Prime Minister did not name specific apps that could be subject to the ban but many of the most popular messaging apps use encryption in some form.