All you wanted to do was download a game from the Internet, and the next thing you knew, your browser homepage had changed, an unwanted toolbar appeared, and you found yourself plagued by annoying pop-up ads that danced around your screen. 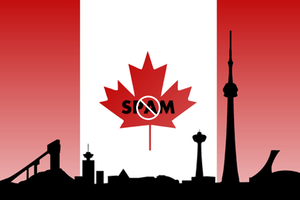 Such experiences should be less of a problem for Canadians thanks to new rules from the Canadian Radio-television and Telecommunications Commission which came into effect last week.

The new guidelines make it illegal to install programs on an individual’s computing device (such as laptop, smartphone, desktop computer, gaming console or other connected device) without the operator’s consent. The provisions are part of Canada’s Anti-Spam Legislation (or CASL) which came into force on July 1, 2014. The rules are designed to protect Canadians from damaging and deceptive forms of spam and online threats while still being fair to businesses trying to compete in the global marketplace.

The new regulations apply beyond Canada’s borders, too, meaning companies operating outside the country are expected to comply with the rules when dealing with computers or other devices located in Canada. The rules also apply to installations on a computer located outside Canada if the person who installed the program was in Canada.

CASL’s guidelines prohibit companies from installing concealed malware that isn’t disclosed to the user when installing another program or app. The rules also apply to concealed software contained on, for example, a music CD a consumer purchases and which is automatically installed when the CD is inserted into the computer.

The CRTC also encourages Canadians to report suspected violations of the anti-spam legislation to the Spam Reporting Centre. Information sent to the centre is used by the CRTC, the Competition Bureau and the Office of the Privacy Commissioner to enforce Canada’s anti-spam law. It’s not reasonable to expect the new guidelines will completely prevent Canadians from encountering spam, adware or malware, since many outfits that send out such nuisance or harmful programs are not reputable businesses and have little concern about the law.

But the new rules should help to reduce the annoyance to Canadian consumers when using their computers or other connected devices. Canadians can help themselves by being wary of potential adware or malware when surfing the web or downloading programs.

Avoiding sites that raise questions about how reputable they might be is always a good rule of thumb. But if an unwanted program takes up residence on your computer or other device, reporting it to the Spam Reporting Centre might help produce some action that can prevent headaches in the future – if not for you, then for someone else. As television comedian Red Green used to say, “We’re all in this together.”