German engineers create a machine which can scan an object, destroying it in the process, then transmit it over the internet and recreate it anywhere in the world using a 3D printer. Could it be the first prototype of a teleportation machine? 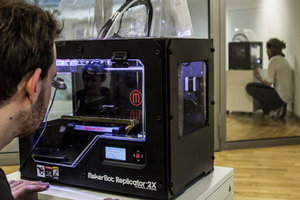 German engineers have created a machine which can take a physical object, scan it, and re-build it in a new location. Because it is effectively an early prototype for a Star Trek transporter the group have called it "Scotty" after the chief engineer on the Starship Enterprise, who Captain Kirk was regularly seen to order: "beam me up".

The machine scans small objects with a camera layer-by-layer, as a milling machine slowly destroys it. By slicing the object into layers it is possible to get a detailed view of the object, even including any hollow cavities. A detailed model is then encrypted and digitally transmitted over the internet to a second machine which reconstructs it with a 3D printer. All of that complex work is hidden from the user, who only has to place an object into the sender unit, name a recipient and press the “relocate” button. Its creators say that the machine effectively “relocates physical objects across distances”.

“Scotty guarantees that a personal, handmade gift remains unique when sent across distances, i.e. that there is no other copy - an important aspect that emphasises the intimate relationship between sender and receiver,” says the scientific paper published by the researchers. The group, from the Hasso Plattner Institute in Germany, are now planning to make more advanced versions that can more accurately reconstruct objects.

But before we can eschew budget airlines and simply beam ourselves away on holiday, the machine will have to improve significantly. The first version has several limitations, as you would expect from a prototype. Firstly, objects must be painted black to increase contrast for the scanner. And the relatively cheap commercial 3D printer can only replicate objects in plastic, in one colour, and in limited resolution. Quite a lot of intricate detail is lost in scanning, transmission and reproduction.

One interesting problem is whether or not people will treat the recreated object the same, even once it has become sufficiently advanced to make identical replicas? Psychologists have shown that the answer is likely no, after tests that showed sentimental value could not be transferred to even identical copies of items.