The Internet of Things is very dangerous

Everybody who has Internet-connected home security systems may not be the only ones monitoring their homes. A new HP study found that 100 percent of the studied devices used in home security contain significant vulnerabilities, including password security, encryption and authentication issues. 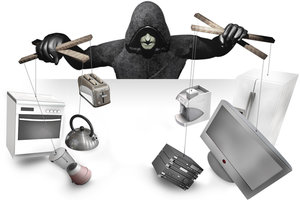 Home security systems, such as video cameras and motion detectors, have gained popularity as they have joined the booming Internet of Things (IoT) market and have grown in convenience.

Gartner forecasts that 4.9 billion connected things will be in use in 2015, up 30 percent from 2014, and will reach 25 billion by 2020. Manufacturers are quickly bringing to market connected security systems that deliver remote monitoring capabilities. The network connectivity and access necessary for remote monitoring presents new security concerns that did not exist for the previous generation of systems that have no internet connectivity. "As focus on the Internet of Things continues to grow, these findings remind us that increased connectivity brings with it inherent risks—often including serious implications for our privacy.

It’s incumbent upon us as an industry to raise awareness among consumers about the security risks of living increasingly connected lives. And while we do expect IoT security to get worse before it gets better, our research prompts both the creators and consumers of IoT technologies to keep security in mind as they explore this evolving and exciting space," Daniel Miessler, Practice Principal at HP, wrote in a message. 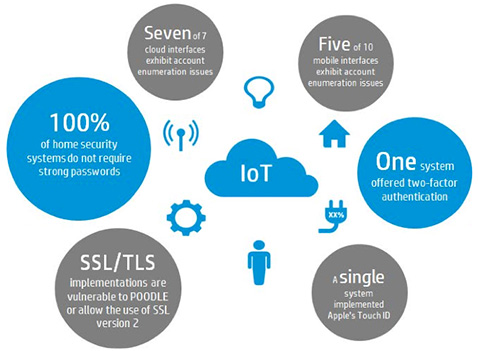 The most common and easily addressable security issues reported include:

Insufficient authorization: All systems that included their cloud-based web interfaces and mobile interfaces failed to require passwords of sufficient complexity and length with most only requiring a six character alphanumeric password. All systems also lacked the ability to lock out accounts after a certain number of failed attempts.

Privacy concerns: All systems collected some form of personal information such as name, address, date of birth, phone number and even credit card numbers. Exposure of this personal information is of concern given the account harvesting issues across all systems. It is also worth noting that the use of video is a key feature of many home security systems with viewing available via mobile applications and cloud-based web interfaces. The privacy of video images from inside the home becomes an added concern.

As IoT product manufacturers work to incorporate much needed security measures, consumers are urged to consider security when choosing a monitoring system for their home. Implementing secure home networks before adding insecure IoT devices, instituting complex passwords, account lockouts and two-factor authentication are only a few measures consumers can take to make their IoT experience more secure and safe.