US president Barack Obama went to the heart of Silicon Valley to a cyber security summit organized by the White House to warn tech leaders that they should share more information with the government to thwart attacks like Sony hack. 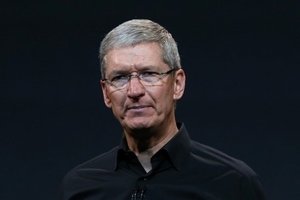 If that was unprecedented — the president reduced to traveling across the country to ask the tech elite for help — the speech that preceded it showed the gulf between Washington and Palo Alto. Apple chief executive Tim Cook spoke much more personally on the very real power of all these little bits of data:

We still live in a world where all people are not treated equally. Too many people do not feel free to practice their religion or express their opinion or love who they choose. A world in which that information can make a difference between life and death. If those of us in positions of responsibility fail to do everything in our power to protect the right of privacy, we risk something far more valuable than money. We risk our way of life. In other words, we’re not convinced.

The relationship between tech leaders like Cook and the Obama administration has been strained since the revelations by Edward Snowden into the extent of spying by US authorities — and the techies have been fighting back. Apple, Google, and others have embraced end-to-end encryption, where even they don’t know what’s being sent by users and so could not give up information even if ordered to do so — much to the anger of the FBI. They also publish information about the requests they receive from the US government for users’ data.

OUR POINT
Tim Cook is cunning when making such statements. All of us heard that Apple services were the reason of iCloud flaws and they led to celebrity photos being leaked for many times. The iCloud leaks caused a great resonance in society. Apple has pushed out its first-ever automated security update, without asking, and is going to store fingerprints in the iCloud. Would this system be safe? Wil you consider storing your encrypted fingerprints in the cloud? Moreover, Edward Snowden claimed that iPhone had special software that allows the government to spy on you. Now Tim Cook’s claims do not coincide with his actions. He might have decided to build a political career and now tries to tell people what they want to hear. But here’s the question: why members of US government aren't allowed to use iPhone. Anyway it’s up to you to decide whether to believe such statements. We recommend you to be alert.

Apple and other companies are also refusing to give the government “back door” access to their servers and operating systems — though Apple has reportedly given such access to China. (Apple has said that it never “worked with any government agency from any country to create a backdoor in any of our products or services.”) The US government summit at Palo Alto was a good first step, but the relationship between the two doesn’t look set to heal anytime soon. At least Apple showed up. Facebook, Google, and Microsoft didn’t even bother.