Europeans are starting to respond to a growing sense of unease over their personal data online, with over half now avoiding posting personal details online, a new report by internet security company Symantec claims. 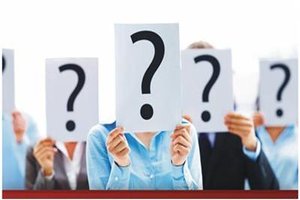 But despite the extra caution, only 1 in 4 read the terms and conditions in full when buying or signing up to products and services online. One in 3 consumers across Europe admitted to providing false information to protect their privacy.

36% of Germans and 34% of U.K. and Spanish respondents stated they had given fake details online—the highest across Europe—in a bid to avoid giving out their credentials. The fake details include email address, phone number, and even a name. Young people aged 18-24 were most likely to provide false details, the report found. Those aged 65 and over were most likely to provide true information when signing up to online services.

Symantec’s State of Privacy report shows Europeans trust retailers, governments and social media the least with their personal data. The company surveyed some 7,000 respondents across seven European markets. Spain showed the highest number of respondents who said they were worried that their personal information was not safe online, followed by Germany. Only in Italy were a majority of people happy for their data to be shared with third parties.

While 32% of respondents believe their personal data is being used to improve customer experience, 70% think their personal data is being sold on to third parties for profit, and 74% think that it is unfair that companies make money from their personal information. Almost two-thirds of Europeans surveyed said they had experienced a data protection issue, which could encompass anything from an email account being hacked, bank details stolen, social media account hack, or responding to an online scam.

Sian John, chief security strategist EMEA at Symantec, said people were beginning to express their mistrust in businesses, especially in the technology space. Businesses relying on user data need to take into account that some consumers could be falsifying their personal information, she said. “You may be putting your faith in user data at the expense of truth,” John said. American people are scared of a lot of things, with their biggest fears include being the victim of identity theft.

Symantec’s survey comes on the backdrop of a report that alleges that US and UK intelligence hacked into the computer networks of Gemalto NV, a French-Dutch SIM card maker. The report, which has served as a conduit for leaks from former NSA contractor Edward Snowden, said a joint GCHQ-NSA team stole encryption keys the SIM card manufacturer embedded into hundreds of millions of cards it shipped to mobile network customers around the world. Gemalto said that despite the alleged hack, its SIM products were safe and secure.