New glasses will protect you against facial recognition

AVG experts announced their plans on launching a new type of glasses that virtually render their users “invisible” to facial recognition software and intrusive cameras. Invisibility glasses were developed in an attempt to provide internet security and protect the privacy of their users both on-and off-line. 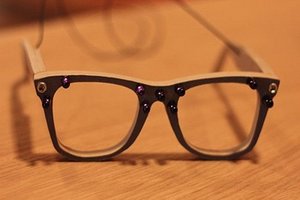 Many people feel constrained by the wide spread of smartphone cameras in public spaces, as well as by the surveillance cameras that lurk at nearly every corner.

And to top it off, Facebook stated that it would soon release a new facial recognition software that would be able to tell with a more than 90 percent accuracy who the person in that photo is. Specialists said they started to look for new ways to protect online privacy, when Facebook announced its Deep-Face System. Deep-Face is an AI system that can detect the identity of a person by scanning a photo with 97.25 percent accuracy, which makes it almost human-like. The technology is currently tested in the U.S. but it will soon be available in other countries as well.

But there are other facial recognition advancements that pushed AVG developers toward invisibility glasses, such as Google Street view, which pictured people in embarrassing stances such as vomiting or being arrested, or even filmed them on their private property.

The team explained that their new gadget uses infrared LED light along with a retro-reflective coating to block any attempt of a clear photo of the wearer. The infrared light’s sole purpose is to disrupt facial recognition software by blurring the areas around the eyes and the nose. But there is also a limitation as some smart cameras are equipped with infrared filters that can easily dodge the wavelengths emitted by the glasses.

Additionally, the retro-reflective coating on the glasses reflects light back making it impossible for a clear capture to be made. Still, the technology only protects the user against flash photography, developers explained. Tanweer Ali, one of the developers of the invisibility glasses, hopes that the new glasses will counterbalance the increasingly intrusive technology of the digital age.