Do you want to unlock smartphone with your eyes? So do it!

Are you tired of punching in numbers or swiping strange patterns to unlock your smartphone? Some of the new phones launching at Mobile World Congress are sporting fingerprint scanners and facial recognition, but a new device from ZTE uses a very different biometric security measure to lock its screen. 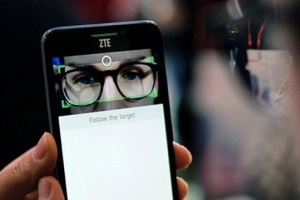 Using technology from Kansas City-based EyeVerify, the ZTE Grand S3 uses its front facing camera to check you are who you say you are, based on your baby blues.

EyeVerify’s technology uses an ordinary front-facing camera — its only requirement is that it takes photos at least one megapixel large. Instead of looking at your retinas, EyeVerify authenticates users by looking at vein patterns formed by blood vessels in the whites of the eye. ZTE calls its implementation Eyeprint ID, and it will come to other devices in its high end “Grand” line of smartphones. Android Central was able to try the ZTE Grand S3, and its eye-based unlocking software even works if you wear glasses:

One major question is what EyeVerify does better than fingerprint scanners, which have become the de facto biometric security measure for smartphones.The setup is very simple. A green line bounces up and down the screen, requiring that you follow it with your peepers for about eight seconds. Meanwhile, the front-facing camera records the blood vessels in the whites of your eyes and creates a secure ID. The process could be faster, but after you've done it once, you should, in theory, never have to do it again. Unless you swap your eyeballs Minority Report-style, of course. Only one Eyeprint can be registered at a time though.

EyeVerify CEO Toby Rush wrote in a message earlier this month comparing the two approaches. One of EyeVerify’s largest advantages is that it doesn’t require new hardware. Fingerprint scanners are expensive, and according to Rush, users have to look at their phone ever time it is unlocked, making eye-based verification preferable. However, he admits, in the burgeoning payments market, a fingerprint scanner makes more sense. Imagine standing at a retailer and staring at your phone to confirm your identity.

The fact that EyeVerify doesn’t require specific hardware means it could also work well for security on cross-platform apps. Banks and credit unions are looking into EyeVerify as a way to lock down their mobile apps. Last year the FBI planned to build out a facial recognition system that can query a huge database of photos to identify someone based on his or her appearance regardless of criminal history, reports the Electronic Frontier Foundation. It meant that your security and privacy