Does Apple ruin your iPhone on purpose?

Every year, Apple tempts the world with a new, expensive iPhone, hailed as the fastest and best iPhone ever. You buy it. And then, just in time for the next fastest iPhone ever to hit stores, the one in your pocket feels crummier and more sluggish than ever. Is it coincidence? Are you sure? 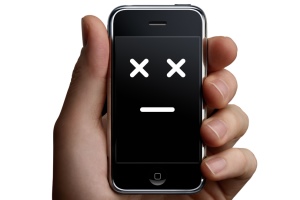 Apple's products are announced and sold in regular cycles — at this point, a new model a year for each of its flagship product lines.

This means that, merely a single year from the time you first learn about the iPhone 6, that phone will no longer be cool or shiny or interesting or desirable; instead, the iPhone 7 (or, more likely, the iPhone 6S or 6+ or 6G) will be the thinnest and lightest and best. That's a pretty tight schedule. Most of us, if left alone with our thoughts and our devices, will be happy with a new phone for two or three years — and for a company that's built its reputation on regularly moving products at an immense scale, that represents a problem. How can Apple keep up the revenues that make it Apple if consumers only need to buy one Apple product every three years or so? Marketing helps, yes—as does introducing a new before-that-moment-unnecessary consumer computing product every year or two.

But what if something more sinister is involved? What if Apple can induce you to purchase a new device at its whim — by rendering your old devices useless? According to some smartphone paranoids, Apple products don't just have a short shelf life — they're actually designed to slow down, exactly (and conveniently) when newer models are available. Or, even more ominously, Apple is intentionally beaming software to your handset that makes it like a brick.

Masterful marketing is one thing, but deliberately building expensive phones that aren't made to last is a deceitful practice known as "planned obsolescence," and iPhone owners have been speculating about it for years. The slowdown conspiracy's biggest mainstream moment was a 2013 article in the New York Times Magazine by Catherine Rampell:

At first, I thought it was my imagination. Around the time the iPhone 5S and 5C were released, in September, I noticed that my sad old iPhone 4 was becoming a lot more sluggish. The battery was starting to run down much faster, too. But the same thing seemed to be happening to a lot of people who, like me, swear by their Apple products. When I called tech analysts, they said that the new operating system (iOS 7) being pushed out to existing users was making older models unbearably slow. Apple phone batteries, which have a finite number of charges in them to begin with, were drained by the new software. So I could pay Apple $79 to replace the battery, or perhaps spend 20 bucks more for an iPhone 5C. It seemed like Apple was sending me a not-so-subtle message to upgrade.

But this was just another revolution in the annual cycle of upgrade agony. Five years ago, Apple released iOS 4, which offered brand new (in 2010) features like multitasking and a tap-to-focus camera. It also completely crippled the iPhone 3G, an incredibly popular model that sold over a million units in its debut weekend. Over Adam Frucci described his post-upgrade plight: "With my phone, typing has become nearly impossible. One of the first letters I hit pops up, but then stays stuck as I continue to type. It catches up eventually, but without the visual cues that I'm hitting the right keys, it makes typos an inevitability."

Furthermore, opening very basic security apps has gotten much slower, and apps crashing to the home screen is much more frequent. Merely trying to open the settings panel took me three tries right after installation, for example. Loading up my photo library takes upwards of 10 seconds. Updating Instapaper takes twice as long as it used to. There's a new pause when I hit the home button from within an app, and when it finally does close, the animation of app icons falling back into place is jittery and stilted.

This was, of course, right around the time Apple announced the iPhone 4, perhaps its flashiest and most ambitious product reveal to date. This was maybe the most glaring case of iPhone slowdown, but hardly the only bad example. When iOS 7 came out in 2013, many iPhone users felt like their phones were better off before upgrading. Then, like clockwork, when iOS 8 arrived, users documented how much faster their phones were on iOS 7:

This isn't all in our heads. An from 2014 even shows that Google queries for "iphone slow" spike every year, coinciding with these product updates; a look at Google's trends page forecasts further spikes:

Given that Apple fans are typically more loyal to the company than they are to their own mothers, conspiratorial allegations like this meets heavy resistance. Rene Ritchie, editor of Apple enthusiast site iMore, dismissed charges of planned iPhone obsolescence as "sensational," a campaign of "misinformation" by the uninformed.

Apple defenders use two different arguments: breaking iPhones on purpose risks losing customers, and slowdown is inevitable when you keep adding new software features. The second point has some truth to it: bigger and better software features often require faster hardware, and unlike a desktop computer there's no way to supercharge an old iPhone with more memory or a better processor. As Christopher Mims pointed out on Quartz, "There is no smoking gun here, no incriminating memo," of Apple malfeasance. And yet:

There is a way to get around planned obsolescence, whether you believe it's intentional or not. I've been using Apple products for about 25 years. And one of the first things I learned was: Except for small, incremental updates, do not upgrade the operating system of the hardware you are using. In 2015 we can't trust Apple to have our backs as consumers, nor can we suppose that literally every single thing it does as a company isn't deliberate and calculated; even if your iPhone isn't being sabotaged, someone decided that drained batteries and slow email is O.K. to hit rock bottom come shopping time. Let's not be naive.

When iOS 28 arrives someday alongside the iPhone 26, it's not realistic to expect our trusty iPhone 25 to do everything as well as the new model. That's fine. The price of progress might be missing out on some flashy features, but that shouldn't mean our old phones are rendered turd-bricks. Just because I can't do Cool New Thing X doesn't mean my keyboard should freeze when I'm trying to text "hello" to someone, or that the photos I've already taken should take ages to load.

I'm not asking that my old phone becomes better, but it's not too much to expect our old phones to not become much worse. These seem like headaches Apple could easily engineer its way around if it really wanted to make the phone you bought two years ago worth holding onto. But why the hell would Apple ever want to do you a favor?