New Barbie dolls are able to spy on children

Mattel's new "Hello Barbie" has more tricks up her sleeve than just saying hello. With the press of a button, Barbie's embedded microphone turns on and records the voice of the child playing with her. 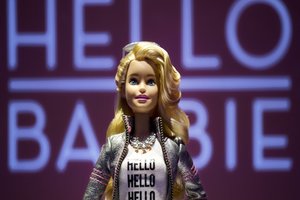 The recordings are then uploaded to a cloud server, where voice detection technology helps the doll make sense of the data. The result?

An inquisitive Barbie spy who remembers your dog's name and brings up your favorite hobbies in your next chitchat. The doll, which made her debut at the 2015 American International Toy Fair, has privacy activists demanding its removal. "Kids using Hello Barbie aren't only talking to a doll," said Susan Linn, director of Campaign for a Commercial-Free Childhood." They are talking directly to a toy conglomerate whose only interest in them is financial." The Campaign for a Commercial-Free Childhood, which has launched a petition against Mattel, worries that the toy leaves children entirely vulnerable to sneaky advertorial efforts from the giant toy company.

"In Mattel's demo, Barbie asks many questions that would elicit a great deal of information about a child, her interests, and her family," Angela Campbell, a faculty adviser at Georgetown University's Center on Privacy and Technology, said. "This information could be of great value to advertisers and be used to market unfairly to children." Despite bringing in $7.1 billion in 2013 toy sales, Mattel's profits have been on the decline, and the company faces growing competition with digital games and toys.

Mattel partnered with ToyTalk, a San-Francisco based start-up, to give Hello Barbie her voice. ToyTalk, which has created iPad games where children can converse with digital animals, describes itself as "an award-winning, family entertainment company that creates conversational characters."

ToyTalk CEO Oren Jacob insists that the toy will not use the audio recordings for marketing purposes. "The data is never used for anything to do with marketing or publicity or any of that stuff. Not at all," he told. Yet beyond the scope of a mega-corporation having a portal to a child's inner thoughts, the voice-recognizing toy brings up a host of concerns for privacy advocates, especially because parents can get weekly e-mails with audio files of the child's conversations with Hello Barbie.

While Jacob explained that feature was to ensure that "parents are in control of their family's data at all times," that extra layer of transparency is "troubling," to Linn. "Children confide in their dolls," she said. "When children have conversations with dolls and stuffed animals, they're playing, and they reveal a lot about themselves."

As voice recognition technology has become increasingly reliable, we've grown comfortable with seeing it in our devices, from affable mobile assistants like Siri to Amazon's new smart-home gadget Amazon Echo. But there's a difference between an adult knowingly giving their information to a company and a child unknowingly playing with a data-collecting toy. Golan Levin, an associate professor at Carnegie Mellon University who studies new modes of interactive expression, is also concerned with the doll's data collection. "This is actually downright creepy," he told. "The difference between Siri and this toy is that I'm an adult. I've consented to give my information to Apple."

Mattel told the Post that they are "committed to safety and security, and Hello Barbie conforms to applicable government standards." But with the recent high-profile threats to online data, not everyone's convinced. "They're toy makers, not a cyber security company," Levin said. "Why don't they talk to Sony about cyber security vulnerabilities?" Keep an eye (and ear) out for Hello Barbie, who plans to hit shelves this fall at $74.99.