In classical mythology, Aquila is the eagle carrying Jupiter’s thunderbolts skyward. At Facebook, it is the code name for a high-flying drone, indicative of the social networking company’s lofty ambitions. 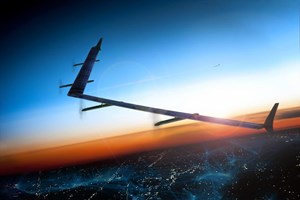 The V-shaped unmanned vehicle, which has about the wingspan of a Boeing 767 but weighs less than a small car, is the centerpiece of Facebook’s plans to connect with the five billion or so people it has yet to reach.

Taking to the skies to beam Internet access down from solar-powered drones may seem like a stretch for a tech company that sells ads to make money. The business model at Facebook, which has 1.4 billion users, has more in common with NBC than Boeing. But in a high-stakes competition for domination of the Internet, in which Google wields high-altitude balloons and high-speed fiber networks and Amazon has experimental delivery drones and colossal data centers, Facebook is under pressure to show that it, too, can pursue projects that are more speculative than product.

One of those offbeat ideas, or so the thinking goes, could turn out to be a winner. “The Amazons, Googles and Facebooks are exploring completely new things that will change the way we live,” said Ed Lazowska, who holds the Bill and Melinda Gates Chair in Computer Science and Engineering at the University of Washington. “There are other companies out there like Hewlett-Packard and IBM, but they aren’t doing the really huge things anymore.”

At a conference in San Francisco on Wednesday, Facebook’s chief executive Mark Zuckerberg explained how Facebook was opening the code to free messenger, its mobile messaging app, so other companies can build right on top of what it’s already doing. The move is a key component of its efforts to improve its already strong position among mobile computing devices.

That is Step 1 in a series — including drones, goggles that plug into virtual reality, and artificial intelligence — Facebook plans to work on in the coming years to broaden its influence. At the conference, the company showed off nearly 50 apps for Messenger, including one that turns text messages into songs and another that allows a user to search for and send an animated GIF to express a mood.

“Until now, we have focused on improving Messenger and messenger free apps by building all of these features ourselves,” Mr. Zuckerberg told developers. By opening the platform, he said, Facebook wants to tap the creativity of other app makers. “We’re really excited about what you all are able to do with these fast and simple tools we are rolling out,” he said.

Facebook’s drone team, which came to the company through the acquisition last year of the drone maker Ascenta, say they believe their solar-powered craft can eventually be aloft up to three months at a time, beaming high-speed data from 60,000 to 90,000 feet to some of the world’s remotest regions via laser. Test flights are to begin this summer, though full commercial deployment may take years. Mark Zuckerberg claimed that as part of our Internet.org effort to connect the world, we've designed unmanned aircraft that can beam internet access down to people from the sky.

“We want to serve every person in the world” with high-speed Internet signals, said Yael Maguire, head of Facebook’s Connectivity Lab. The dream — assuming regulators around the planet go along with it — is a fleet as big as 1,000 drones connecting people to the Internet. And where it is too remote even for the drones, satellites would do the trick.

“Can we reach a point where everyone on the planet gets the same message at once?” Mr. Maguire said. “I’m looking forward to that day.” That day could be a long way off, Facebook executives admit. While they don’t know what a final version of Aquila will cost, they appear comfortable with spending billions to realize that vision. Others are not so sure. Facebook is also courting partners with the manner in which it builds new kinds of computers at its data centers. The idea is that if it is open about what it does and even allows other people to use that information and experiment with their own prototypes, then more companies will adopt that technology and align themselves with Facebook.

Facebook’s effort in artificial intelligence is called deep learning, for the number of levels at which it critically analyzes information. By figuring out context, Facebook better knows why people anywhere are looking at something, and what else it can do to keep them engaged. Twitter and even Google collaborate with Facebook and others on open-source A.I. software called Torch. Facebook says it likes working with competitors on that technology because, in the end, they can help improve it.

“There is nothing that any single company is going to solve by itself,” said Yann LeCun, Facebook’s A.I. research director and a New York University professor. For the long term, Mr. Zuckerberg hopes Facebook’s A.I. will translate languages on the fly, know strangers you might meet and, of course, bring you the highest-value ads. Because, in the end, it’s still about getting you to look at more ads. “The fundamental thing about advertising is people paying to get a message in front of you,” Mr. Schroepfer said. “That won’t go away in my life, though the form may change.”