Toshiba Corp. said its humanoid robot will debut at the information desk of an upscale department store in Tokyo next week and provide audio guidance to customers. 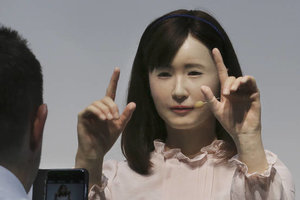 The female-looking robot, named Aiko Chihira, will only speak Japanese. Unlike humanoid robots that have already started careers in customer service, including at Bank of Tokyo Mitsubishi UFJ, Chihira can’t make conversation or respond to spoken questions.

Instead the robot was created to appear, talk and move as humanly as possible. Chihira blinks, bows and moves its mouth and lips smoothly while speaking. A Toshiba spokesman said that Chihira is programmed with multiple human-like expressions, and that it will offer six-minute guidance to customers with information about the department store including events. Chihira has appeared at exhibitions and security events, but this is the first time it will provide customer service. The robot’s appearance wasn’t modelled on any specific person but was designed to give a friendly impression, according to Toshiba.

The robot will be set up at the Mitsukoshi department store in Nihonbashi, Tokyo, on Monday and Tuesday. Ms Chihira uses sign language to introduce itself to humans. Toshiba describes the eerie Android, which has blinking eyes and a fixed smile, as having the appearance of 'a friendly young woman.' At present, the android can mimic only simple movements, such as exchanging greetings and signing in Japanese.

Artificial intelligence, robotics and new disruptive technology are challenging white-collar professions that previously seemed invulnerable. For years now, some researchers have been anticipating that robots would take away jobs from humans. University of Oxford researchers Carl Benedikt Frey and Michael Osborne estimated in 2013 that 47 percent of total U.S. jobs could be automated and taken over by computers by 2033.