Germany alleged to have helped NSA spy on Europe

Germany's intelligence service, the Bundesnachrichtendienst (BND), has been helping the NSA spy on European politicians and companies for years. 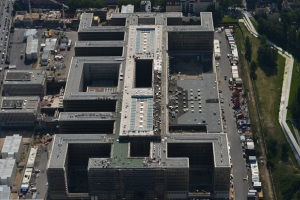 The NSA has been sending lists of "selectors" — identifying telephone numbers, e-mail and IP addresses — to the BND, which then provides related information that it holds in its surveillance databases. The NSA sent selector lists several times a day, and altogether 800,000 selectors have been requested.

The BND realized as early as 2008 that some of the selectors were not permitted according to its internal security rules, or covered by a 2002 US-Germany anti-terrorism "Memorandum of Agreement" on intelligence cooperation. And yet it did nothing to check the NSA's requests systematically. It was only in the summer of 2013, after Edward Snowden's revelations of massive NSA and GCHQ surveillance, that the BND finally started an inquiry into all the selectors that had been processed.

Investigators found that the BND had provided information on around 2,000 selectors that were clearly against European and German interests. Not only were European businesses such as the giant aerospace and defense company EADS, best-known as the manufacturer of the Airbus planes, targeted, so were European politicians — including German ones.

However, the BND did not inform the German Chancellor's office, which only found out about the misuse of the selector request system in March 2015. Instead, the BND simply asked the NSA to make requests that were fully covered by the anti-terrorism agreement between the two countries. This was because the BND was worried that the NSA might curtail the flow of its own intelligence data to the German secret services if the selector scheme became embroiled in controversy.

The information about this activity has finally come out thanks to a long-running committee of inquiry, set up by the German Bundestag (federal parliament), which has been trying to get to the bottom of the NSA activities in Germany, and of the BND's involvement in them. The committee's investigation suggests that as many as 40,000 of the selectors were targeting European and German interests — far more than the 2,000 found by the BND.

There is likely to be considerable political fallout from the latest news. Because of the way the affair has been handled, with the German Chancellor kept in the dark for years, it is widely expected that the head of the BND, Gerhard Schindler, will be forced to resign. News that the BND has been actively helping the National Security Agency to spy on European companies and politicians will also deepen the public's already considerable anger at US surveillance of Germans, first revealed by Snowden's leaks.

That, in its turn, could make it even harder to persuade them to accept the huge US-EU trade agreement currently being negotiated behind closed doors, known as the Transatlantic Trade and Investment Partnership (TTIP). The Germans who care about their privacy and security are already the leading skeptics: over a million of them have signed an online petition calling for the TTIP talks to be halted, while thousands took to the streets earlier this month to protest against the proposed deal.