A federal appeals court has ruled that the National Security Agency program to collect information on billions of telephone calls made or received by Americans is illegal. 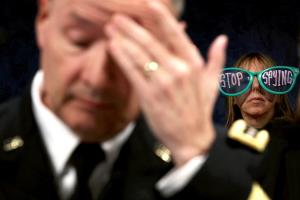 Documents from the trove of Edward Snowden, the former NSA contractor, shone a light on the US government’s use of sophisticated computer programs to monitor, record, transcribe and analyse all sorts of speech.

A three-judge panel from the New York-based 2nd U.S. Circuit Court of Appeals held that a law Congress passed allowing collection of information relevant to terrorism investigations does not authorize the so-called “bulk collection” of phone records on the scale of the NSA program. The judges did not address whether the program violated the Constitution. Writing for a unanimous panel, Judge Gerard Lynch said allowing the government to gather data in a blanket fashion was not consistent with the statute used to carry out the program: Section 215 of the PATRIOT Act.

“The interpretation urged by the government would require a drastic expansion of the term ‘relevance,’ not only with respect to § 215, but also as that term is construed for purposes of subpoenas, and of a number of national security-related statutes, to sweep further than those statutes have ever been thought to reach,” Lynch wrote in an opinion joined by Judges Robert Sack and Vernon Broderick.

“The interpretation that the government asks us to adopt defies any limiting principle. The same rationale that it proffers for the ‘relevance’ of telephone metadata cannot be cabined to such data, and applies equally well to other sets of records,” Lynch added. “If the government is correct, it could use § 215 to collect and store in bulk any other existing metadata available anywhere in the private sector, including metadata associated with financial records, medical records, and electronic communications (including email and social media information) relating to all Americans.”

The 2nd Circuit, which acted on a lawsuit brought by the American Civil Liberties Union, is the first appeals court to rule on the legality of the telephone metadata program that came to light after leaks from former NSA contractor Edward Snowden. The program was repeatedly authorized by a special intelligence court in Washington. Two other federal appeals courts are currently considering similar challenges.

The legal provision the 2nd Circuit found inadequate is set to expire on June 1. Language in the court’s ruling allows the program to continue through that time. A White House spokesman offered no immediate reaction to the new court ruling but noted that President Barack Obama has called for restructuring the call-tracing program so that telephone companies, rather than the government, would retain the data. The information would be readily accessible and searchable in terrorism investigations.

“We are in the process of evaluating the decision handed down this morning,” White House spokesman Ned Price said. “The president has been clear that he believes we should end the Section 215 bulk telephony metadata program as it currently exists by creating an alternative mechanism to preserve the program’s essential capabilities without the government holding the bulk data.

“We continue to work closely with members of Congress from both parties to do just that, and we have been encouraged by good progress on bipartisan, bicameral legislation that would implement these important reforms,” Price added. Testifying on Capitol Hill on Thursday, Attorney General Loretta Lynch suggested the looming expiration of the program may be more critical to its future than the new 2nd Circuit ruling.

“We are reviewing that decision but given the time issues involving expiration of [the legal provision] we are also, and have been, working with this body and others to look for ways to reauthorize Section 215 in a way that does preserve its efficacy and protect privacy,” Lynch said in response to a question at a Senate Appropriations Committee hearing.

Lynch called the provision “a vital tool in our national security arsenal.” However, the usefulness of the phone metadata has been the subject of considerable controversy. A review panel set up by Obama in the wake of the program’s disclosure by Snowden concluded that the program had not been critical to disrupting any terrorist plot in the U.S.

Since that report emerged, most administration officials have used the more lukewarm term “important” to describe the program’s significance, saying it serves mainly as a kind of insurance policy increasing confidence that the U.S. could detect or unwind a plot aimed at the homeland. The House passed a law last year that would end the so-called bulk collection of phone data under the program but preserve other uses of the statute. The Senate did not act on the measure.

Senate Majority Leader Mitch McConnell (R-Ky.) has proposed a “clean” reauthorization of Section 215 and two other expiring legal provisions, but it is unclear whether they have the support needed to clear either house of Congress. The court’s ruling may add to the confusion on Capitol Hill since it’s unclear what legal impact simply re-enacting the same language the court found inadequate would have.

McConnell took to the Senate floor Thursday to fiercely defend the program. “According to the CIA, had these authorities been in place more than a decade ago, they would have likely prevented 9/11,” McConnell said. The Kentucky Republican also criticized the USA Freedom Act, the bill proposed by surveillance reform proponents, as a measure that will “neither keep us safe, nor protect our privacy.” The bill would make more cumbersome a national security program where speed is crucial, McConnell said, and also put it in the hands of untrained telecommunications employees.

Democratic presidential candidate and former Secretary of State Hillary Clinton weighed in on behalf of the reform bill, but didn’t comment directly on the 2nd Circuit ruling. “Congress should move ahead now with the USA Freedom Act — a good step forward in ongoing efforts to protect our security & civil liberties,” Clinton wrote on Twitter.

Some lawmakers on both sides of the aisle said the ruling vindicates their outrage about the scope of the program. “Today’s court decision reaffirms what I’ve been saying since the Snowden leaks came to light,” Rep. Jim Sensenbrenner (R-Wis.), an original author of the PATRIOT Act, said in a statement. “Congress never intended Section 215 to allow bulk collection. This program is illegal and based on a blatant misinterpretation of the law.”

Sen. Richard Blumenthal (D-Conn.) on Thursday renewed his complaint that the secretive Foreign Intelligence Surveillance Act Court hears one-sided arguments from administration lawyers. “The current FISA system itself is broken — requiring systemic reforms, like an advocate for Constitutional protections that would save the FISA Court from such errors,” Blumenthal (D-Conn.) said in a statement.

The 2nd Circuit said in its ruling Thursday that Congress never indicated it was contemplating mass collection of information on Americans. “Such a monumental shift in our approach to combating terrorism requires a clearer signal from Congress than a recycling of oft-used language long held in similar contexts to mean something far narrower,” Gerard Lynch wrote.

Obama aides have defended the legality of the NSA phone metadata program but have also indicated in recent months that if Congress does not pass legislation addressing the issue by next month, the administration will shut down the effort. Many of the surveillance program’s sharpest critics are skeptical of new legislative proposals and instead favor simply allowing the law to expire in about three weeks.

“The current reform proposals from Congress look anemic in light of the serious issues raised by the Second Circuit,” ACLU executive director Anthony Romero said in a statement. “Congress needs to up its reform game if it’s going to address the court’s concerns.” All the judges on the 2nd Circuit panel are Democratic appointees. Gerard Lynch and Broderick were appointed by Obama, while Sack was named to the bench by President Bill Clinton.