A soupçon of America’s vast surveillance powers has been temporarily suspended with the Senate’s inability to renew them, partly thanks to a stand taken by Senator Rand Paul, who blocked attempts at an extension of the Patriot Act during a Sunday session. 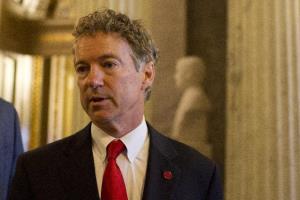 The affected legislation consists of the Patriot Act’s Section 215, one of the most controversial part of the law that allowed for the bulk collection of Americans’ phone calls, and Section 206, the “roving wiretap” that granted US authorities the power to carry out surveillance on all phone and internet communications used by a suspect with a single warrant, regardless of who else was using them.

The Senate is expected to bring those provisions back to life with the passing of the USA Freedom Act, which will reinstate Section 215, albeit in watered-down form. In its current form, the Freedom Act, passed by the House in May, would place limits on how communications data could be obtained from service providers, effectively ending bulk collection of citizens’ metadata, whilst placing more oversight on bodies like the Foreign Intelligence Surveillance Court that deal with requests from the NSA and other agencies.

Though the bill was initially turned away by the Senate, a vote yesterday saw 77 in favour against 17 to move closer to the passing of the legislation. A majority of only 51 is now required on a vote, which will likely take place this Tuesday morning, though amendments could still be added. The Patriot Act laws could still be used by law enforcement thanks to so-called “grandfather clauses”. They allow police and intelligence agencies to use the old surveillance capabilities in open cases, such as investigations into Al-Qaeda, ISIS or other threats to national security.

The White House is keen to ensure surveillance laws are reinstated as soon as possible. “We call on the Senate to ensure this irresponsible lapse in authorities is as short-lived as possible. On a matter as critical as our national security, individual senators must put aside their partisan motivations and act swiftly. The American people deserve nothing less,” the White House said in a statement to media.

However the future of surveillance in America pans out, the Edward Snowden leaks have certainly brought about a shift in public opinion, with a tilt towards less invasive, limited powers. “Tonight, this is a historic baby step.  We should all pause and for us at EFF who’ve been fighting mass surveillance since 2006, take a moment to smile,” said security representatives from the Electronic Frontier Foundation. Earlier it was said that the US Senate failed to pass the so-called USA Freedom Act, as a 57-42 vote fell three votes shy of the 60 needed to bring the measure to the Senate floor.