Freelance spies in NYC are publishing your private conversations

Thanks to Edward Snowden, we know that the National Security Agency collects the phone records of every American in order to keep the country safe from terrorism. 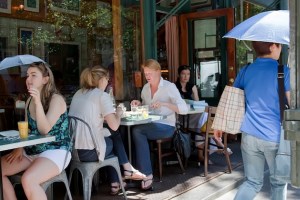 But for the past eight months a group of artists claiming to work for the NSA on "a freelance, pro bono basis" have been recording people's private conversations in popular bars, restaurants, and gyms in Lower Manhattan to ensure that no actionable intelligence falls through the cracks.

"We're looking for terrorism, we're looking for signs of plots and schemes that could put the homeland at risk," one of the group's "agents" tells us. The project's website, We Are Always Listening, includes snippets of actual conversations recorded by tiny, hidden tape recorders placed in The Brindle Room, Café Mogador, and the Crunch Gym in Union Square, among other popular public spaces.

In the recordings, a group of men talk about how a friend is "trying too hard to be one of us," a woman complains about paying more than $2,000/month in rent, and a man describes a former boyfriend's fetish: "He wanted me to like, fake double over in pain. Like we're doing a scene from Batman Returns." None of the recordings contain any last names or other forms of information that would allow the people in the recordings to be directly identified, but first names flow freely.

"The reason we broadcast small, small, small, fractions of what we've gathered is because we've also heard members of the American public say they want a more transparent window into how data is collected," said the "agent," who asked to speak anonymously because New York State law requires the consent of at least one party in order to record a conversation (as Governor Cuomo famously discovered).

"Our agents would dispute that having a conversation at a restaurant or a gym is private. There should not be an assumption of privacy." The Manhattan DA's office declined to comment on the group's activities. The project is seemingly designed to shake Americans (and, based on the locations the group placed their recorders, the Downtown bourgeoisie) out of their torpor with respect to how the NSA collects data and the federal government's reliance on millions of independent contractors with security clearances.

"We imagine people are fine with this type of surveillance," the "agent" said, tongue firmly in cheek. "The general public has mostly spoken in a unified voice saying, well, it's just what you need to do to keep the country safe." For those who believe that posting audio of private conversations online is wrong, or that it surpasses what even the NSA considers appropriate, a button marked "Angry?" on the group's website directs users to the ACLU's website that allows you to contact your federal representatives and urge them to kill the portion of the Patriot Act that allows for the NSA's blanket surveillance (the Senate recently voted to block a bill from the House designed to curtail the government's collection of phone data).

The "agent" told us that New Yorkers should expect more leaked conversations. If you've hung out at 61 Local in Cobble Hill recently, you might want to keep your eye on the group's website: a tape recorder has been listening there for some time.