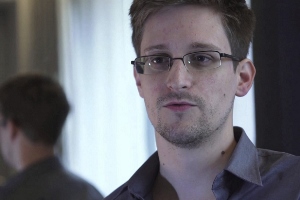 The classified documents came from Snowden, the former NSA contractor who lives as a fugitive in Russia, and were shared with the Times and the investigative journalism non-profit ProPublica.

In mid-2012, Justice Department lawyers wrote two secret memos allowing the NSA to begin hunting on Internet cables, without a warrant and inside the United States, for data linked to computer intrusions originating abroad, according to the documents. It said the data included traffic that flows to suspicious Internet addresses or contains malware. The disclosure of the documents come as U.S. financial institutions, businesses and government agencies are increasingly being targeted in cyberattacks.

The Justice Department permitted the NSA to monitor only addresses and "cybersignatures," patterns tied to computer security intrusions, that it could link to foreign governments. But the documents showed that the spy agency sought to target hackers even when it could not establish links to foreign countries.

During a briefing, White House spokesman Josh Earnest said he was "not in a position to talk in a lot of detail about any sort of covert government programs that may or may not exist." But he said President Barack Obama's administration will remain vigilant about an "ever-evolving" cyber-threat that is increasing in frequency, scale, sophistication and severity.

Brian Hale, spokesman for the Office of the Director of National Intelligence, was quoted as saying, "It should come as no surprise that the U.S. government gathers intelligence on foreign powers that attempt to penetrate U.S. networks and steal the private information of U.S. citizens and companies." Hale also was quoted as saying that "targeting overseas individuals engaging in hostile cyberactivities on behalf of a foreign power is a lawful foreign intelligence purpose."

It should be mentioned that spy agencies targeted mobile phones, app stores to implant spyware. Canada and its spying partners exploited weaknesses in one of the world's most popular mobile browsers and planned to hack into smartphones via links to Google and Samsung app stores, a top secret document shows.