The US National Security Agency tapped phone calls involving German chancellor Angela Merkel and her closest advisers for years and spied on the staff of her predecessors, according to WikiLeaks. 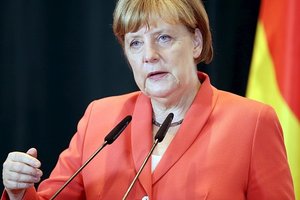 A report released by the group on Wednesday suggested NSA spying on Merkel and her staff had gone on far longer and more widely than previously realised. WikiLeaks said the NSA targeted 125 phone numbers of top German officials for long-term surveillance.

The release risks renewing tensions between Germany and the US a month after they sought to put a row over spying behind them, with Barack Obama declaring in Bavaria that the two nations were “inseparable allies”. WikiLeaks published what it said were three NSA intercepts of Merkel’s conversations, and data it said listed telephone numbers for the chancellor, her aides, her office and even her fax machine.

“The names associated with some of the targets indicate that spying on the Chancellery predates Angela Merkel as it includes staff of former Chancellor Gerhard Schroeder (in office 1998-2002), and his predecessor Helmut Kohl,” WikiLeaks added in a statement.

No comment was immediately available from the German government. The intercepts released on Wednesday detailed communications from Merkel in 2009 regarding the international financial crisis, with the crown prince of the United Arab Emirates in 2009 on Iran, and with advisers in 2011 on the eurozone crisis.

The targeted phone numbers included those for the phones of senior officials at the Chancellery and included that of Ronald Pofalla, Merkel’s former chief of staff, WikiLeaks said. Spying is a sensitive issue in Germany because of abuses committed during the Nazi and Communist eras. Revelations by former NSA contractor Edward Snowden about wide-ranging US espionage in Germany caused outrage when they surfaced.

The spying row has also been stirred by allegations that Merkel’s staff gave the German BND foreign intelligence agency a green light to help the NSA spy on European firms and officials. The latest WikiLeaks release comes just over a week after it published a report showing the NSA wiretapped the communications of two successive French finance ministers and collected information on French export contracts, trade and budget talks. In 2013 National security agency intercepted the messages that came from the German Government. The documents that were published by Edward Snowden were marked with a special code SI.