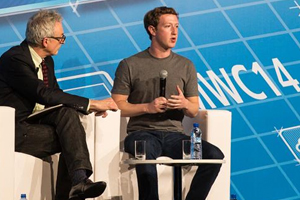 Mark Zuckerberg crusade to connect another billion people to the Internet, but US government's spy scandal last year make these efforts more difficult, said Facebook’s CEO during an interview at the Mobile World Congress trade show in Barcelona, Spain.

Journalist David Kirkpatrick, known for his book "The Facebook Effect" (2010) asked how the leaked documents from the Edward Snowden, former government contractor, jeopardise Facebook and other Internet giants. The companies were accused of providing US National Security Agency unfettered access to their servers. Most likely this scandal has affected company's reputation and its business relations and communications internationally. "It's not awesome for us," Zuckerberg admitted.

"The NSA issues I think are real issues for American Internet companies," he said. "Trust is so important.”

Zuckerberg said that he’s encouraged by recent efforts of the US government to be more open about the data it collects. But he said that such a scandal should not have happened in the first place.

Facebook, along with some other Internet companies, was implicated this past summer when documents were leaked from NSA suggesting their participation in the massive Internet surveillance data-mining program called PRISM, launched by NSA in 2007. This program allows the government to collect and store Internet communications from companies such as Facebook, Google, Apple and others. Furthermore, in accordance with the  FISA Amendments Act of 2008, companies are obliged to provide their data on court approved search terms.

Zuckerberg has repeatedly denied that Facebook gives the government direct access to their servers. He and other leaders of major Internet companies, pushes back hard against the perception that their companies were transferring massive amounts of personal date to the government authorities. Facebook would like to reveal more detailed information about the data shared with the NSA, therefore, in September last year company joined Yahoo in filing a lawsuit asking the FISA court for permission.

Recently, on his Facebook page Zuckerberg posted that he called Obama personally to express 'frustration over the damage the government is creating’. The White House confirmed that Obama spoke with Mr. Zuckerberg.

Well, perhaps it is a little victory for the American IT industry. But here, our SafeUM team decided to go its own way. We use advanced technology and encrypting algorithms to provide our users maximum protection for their communications online.