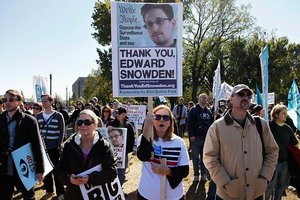 Responding to a “We the People” petition, launched after Snowden’s initial leaks were published in the Guardian two years ago, the Obama administration on Tuesday reiterated its belief that he should face criminal charges for his actions.

“Mr Snowden’s dangerous decision to steal and disclose classified information had severe consequences for the security of our country and the people who work day in and day out to protect it,” Lisa Monaco, Obama’s adviser on homeland security and counter-terrorism, said in a statement. “If he felt his actions were consistent with civil disobedience, then he should do what those who have taken issue with their own government do: challenge it, speak out, engage in a constructive act of protest, and – importantly – accept the consequences of his actions.”

“He should come home to the United States, and be judged by a jury of his peers – not hide behind the cover of an authoritarian regime. Right now, he’s running away from the consequences of his actions.” The US government filed espionage charges against Snowden shortly after his revelations were made public. He has been living under asylum in Moscow, after fleeing the US for Hong Kong in the wake of the leaks. Civil liberties advocates have argued that Snowden’s actions were courageous and stepped up calls on the Obama administration to grant him clemency.

In their petition to the White House, nearly 168,000 signatories hailed Snowden as “a national hero … [who] should be immediately issued a full, free, and absolute pardon for any crimes he has committed or may have committed related to blowing the whistle on secret NSA surveillance programs”.

Monaco said Barack Obama was committed to achieving an appropriate balance between ensuring national security and protecting the privacy rights of American citizens, but underscored the threat posed by the rise of terrorism both overseas and at home.

“We live in a dangerous world. We continue to face grave security threats like terrorism, cyber-attacks, and nuclear proliferation that our intelligence community must have all the lawful tools it needs to address,” she said. “The balance between our security and the civil liberties that our ideals and our constitution require deserves robust debate and those who are willing to engage in it here at home.”

The Obama administration has maintained a hard line on Snowden, even as his revelations prompted the US Congress to approve the most sweeping surveillance reform in decades. Federal lawmakers overwhelmingly passed the USA Freedom Act in June, which effectively ended the federal government’s bulk collection of millions of Americans’ phone records by transferring responsibility to private telecom companies.

The president and a majority of lawmakers on Capitol Hill have nonetheless maintained that Snowden must be prosecuted for violating the law. Republican presidential candidate Marco Rubio on Tuesday said Snowden was “absolutely” a traitor and accused the former intelligence contractor of putting American men and women in uniform at risk. Rubio, a senator from Florida and staunch defender of the USA Patriot Act, said Snowden’s releases were “the most devastating release of information.”

“We know for a fact that there are enemies of the United States today who have changed the way they communicate specifically based on the information he has released. If Mr Snowden had concerns about US intelligence programs, there were multiple different proper channels that he could have raised them. He didn’t have to go to the Chinese or the Russians and turn over troves of important, valuable American information,” Rubio said at a national security forum in South Carolina.

“And here’s the bottom line, you may agree or disagree with our intelligence programs, but the fact is that today there are men and women in American uniforms, who are in danger, in danger, because of the information that he has released.” Some of the leaks, he added, were “flat out inaccurate and flat out lies”.

“They are not true … And much of that information he has manipulated to turn himself into this heroic figure,” Rubio said. “He is without a doubt, not just a traitor, but the information that he’s delivered has had a devastating impact on our intelligence collections. And I can tell you we know less about our adversaries today than we need to know or should have known because of the information he released. He’s done terrible damage to this country. And put the lives of real Americans at danger because of it.”