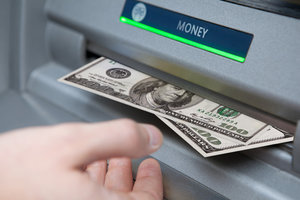 The program is dubbed GreenDispenser and was detected in Mexico. However, it's only a matter of time until similar attacks are adopted by cybercriminals in other countries, researchers from security firm Proofpoint said.

GreenDispenser is not the first malware program to target ATMs. In October 2013, security researchers from Symantec warned about a backdoor called Ploutus that could infect ATMs when a new boot disk is inserted into their CD-ROM drives. The first version of Ploutus allowed criminals to extract money from ATMs by issuing special commands through their PIN pads or through an externally attached keyboard. A second version, found in March 2014, added the option of sending a text message to the ATM to dispense its cash.

Like GreenDispenser, Ploutus was initially found in Mexico, but its second version had English localization, suggesting the people behind it intended to target other countries as well. The idea caught on. In October 2014, researchers from Kaspersky Lab warned about a malware program dubbed Tyupkin or Padpin that was used to infect over 50 ATMs belonging to financial institutions from Eastern Europe.

Earlier this month, researchers from FireEye found yet another ATM malware, which they dubbed Suceful, whose primary purpose is to lock people's cards inside ATMs and then release them to crooks on command. All these incidents and the new GreenDispenser program suggest an acceleration of attacks against ATMs around the world, possibly driven by increased adoption of chip-enabled cards that make card cloning harder.

Like most ATM malware, GreenDispenser likely requires physical access to the machine to be installed, which suggests either the compromise of the ATM's physical security or help from insiders, the Proofpoint researchers said. Once installed, it hooks into the XFS (eXtensions for Financial Services) middleware that is implemented on many Windows-based ATMs. This platform enables the interaction between software and an ATM's peripheral devices, like PIN pad or cash dispenser.

When GreenDispenser is active, the machine's screen will display an error that reads: "We regret this ATM is temporary out of service." While regular customers won't be able to use it, criminals can bypass the error by typing a specific PIN that's hard-coded in the malware. Interestingly, GreenDispenser uses some type of two-factor authentication. After the hard-coded PIN is entered, the ATM will display a QR code, which the criminals probably scan with a mobile application in order to obtain a second, dynamically generated PIN.

The second PIN unlocks an interaction menu on the ATM that gives attackers control over the cash dispenser. Another option on the menu allows criminals to uninstall the malware in a way that securely wipes it and makes it hard for forensics teams to later recover it."We believe we are seeing the dawn of a new criminal industry targeting ATMs with only more to come," the Proofpoint researchers said. "In order to stay ahead of attackers financial entities should reexamine existing legacy security layers and consider deploying modern security measures to thwart these threats."