Government-secret leaker Edward Snowden should be granted protection because his leaks were in defense of human rights, the European Parliament said in a symbolic vote Thursday. 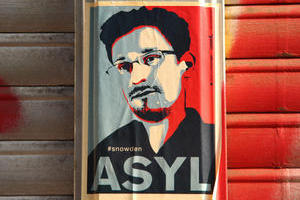 In a 285-281 vote, the parliament passed a nonbinding resolution that called on European Union member states to protect Snowden from "extradition or rendition by third parties" because of "his status as whistle-blower and international human rights defender."

The resolution also asks EU countries to drop any criminal charges against Snowden. The former contractor for the US National Security Agency sparked global debate about surveillance in the digital age when he leaked secret NSA documents to journalists in 2013. He's currently wanted by the US under the Espionage Act and is living in Russia on a three-year residency permit. The leaked documents revealed massive high-tech surveillance programs run by the NSA, its UK counterpart the GCHQ and other spy outfits.

The programs targeted world leaders and common citizens alike and raised questions about everything from tapping cell phones to secretly controlling laptop cameras to nabbing data on Internet users by penetrating servers run by Google, Yahoo and other companies. The European Parliament vote is not binding, so European nations won't be forced to offer Snowden asylum. Nevertheless, Snowden said in a tweet that the vote was a "game-changer."

"This is not a blow against the US Government, but an open hand extended by friends," Snowden said. "It is a chance to move forward." Snowden's location in Russia is secret, and he's been seeking asylum elsewhere. "Until a country grants permanent political asylum, the US government will continue to interfere with my ability to speak," he said in an open letter to the Brazilian government in December 2013.

It's not just Snowden's own government that has criticized his actions. Politicians and intelligence heads in Britain and other countries have spoken out against him, with many saying they can't prevent him from being extradited. Any European country that did offer Snowden asylum would be breaking its extradition treaty with the US. Not honoring such treaties is practically unheard of and could result in major tensions.

That doesn't make asylum in a European country impossible, though, and rights organization Access Group and Snowden's lawyers are calling on EU countries to take the resolution seriously. "It is an overdue step and we urge the member states to act now to implement the resolution," Snowden's Berlin-based lawyer, Wolfgang Kaleck, said in a statement.