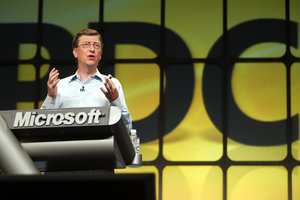 The Microsoft founder took issue with Tim Cook’s characterisation of the government’s order that Apple help break open the San Bernardino shooter’s iPhone as a demand for a “back door”, denying that it would set a wider precedent.

“This is a specific case where the government is asking for access to information. They are not asking for some general thing, they are asking for a particular case,” Mr Gates told. “It is no different than [the question of] should anybody ever have been able to tell the phone company to get information, should anybody be able to get at bank records. Let’s say the bank had tied a ribbon round the disk drive and said, ‘Don’t make me cut this ribbon because you’ll make me cut it many times’.”

Apple has been pulled into a war of words with US law enforcement in the last week, after a judge ordered the company to write software that would enable FBI investigators to unlock Syed Rizwan Farook’s iPhone. Mr Cook, Apple’s chief executive, has called the request a “chilling” example of “over-reach” by the US government that would set a “dangerous precedent that threatens everyone’s civil liberties”.

Mr Gates’s stance sets him apart from the rest of the technology industry, including the company he founded. Satya Nadella, Microsoft chief, has not publicly commented on the matter, but a spokesperson for the Seattle-based company pointed to a statement by the Reform Government Surveillance organisation, of which it is a member, opposing the order.

Silicon Valley executives including Mark Zuckerberg, Facebook chief; Jack Dorsey, Twitter founder; and Sundar Pichai, head of Google, have all sided with Mr Cook. National Security Agency whistleblower Edward Snowden called the showdown “the most important tech case in a decade”. But James Comey, FBI director, has insisted that the case is “quite narrow”.

“We don’t want to break anyone’s encryption or set a master key loose on the land,” Mr Comey wrote in a blog post on Sunday night. Mr Gates told that there were benefits to the government being able to enforce taxation, stop crime and investigate terror threats, but said there must be rules on when the information can be accessed. “I hope that we have that debate so that the safeguards are built and so people do not opt — and this will be country by country — [to say] it is better that the government does not have access to any information,” he said.

Mr Gates was speaking at the launch of the annual letter from his charitable organisation, the Bill and Melinda Gates Foundation, in which he argues that “an energy miracle” will be needed to bring electricity to the one-fifth of the world’s population that does not currently have it, while still reducing carbon emissions to zero. “Let’s science the expletive-expletive out of this,” he said, quoting Matt Damon’s character in the movie, The Martian. “I don’t know what the expletives are.” Earlier Apple CEO Tim Cook denounced a federal judge's order to crack open an iPhone used by a terrorist, calling the situation "chilling" and saying it would deal a major setback to online privacy for all.

OUR POINT
The problem is not in a personal position of any businessman (even the richest one in the world). After all, from February 23, it is not a question of providing access to data on iPhone of a killed terrorist. Intelligence agencies are forcing Apple to develop a special software to break iPhone. And it’s another story.

We are witnessing a struggle between two paradigms. If Apple capitulates, one more border that protects every user from total control will be destroyed. The precedent, if it takes place, will be a crack in the dam. It’s just a matter of time “when will the dam break?”

Any company can only once make a deal with its conscience. But if it happens Pandora's Box will be opened. The company continues its activities, being quite different. There’s no turning back. How can you protect your information from being compromised? We have a solution. In general:
1) audio and video calls are done on P2P technology. Voice and video information is NOT transmitted through our servers;
2) secure chats (in PREMIUM subscription) are encrypted. It is hard to count how many centuries one will need to decrypt any messages;
3) each person who downloads messenger automatically gets an international phone number (all the incoming calls are free for you);
4) you can register by login and password. User doesn’t have to provide either phone number or email, anything that can deanonymize a person;
5) use up to three accounts simultaneously and divide your information flow logically.
Download SafeUM to secure your messaging.
Tags:
Apple USA FBI trends
Source:
Financial Times
2193
Other NEWS
3 Jul 2020