Wireless Networks on US planes monitored by NSA

Companies that provide WiFi on US domestic flights are handing over their data to the NSA, adapting their technology to allow security services new powers to spy on passengers. In doing so, they may be in violation of privacy laws. 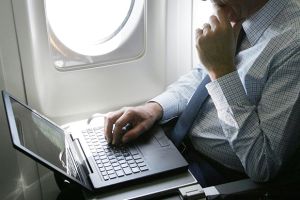 In a letter leaked to Wired, Gogo, the leading provider of inflight WiFi in the US, admitted to violating the requirements of the Communications Assistance for Law Enforcement Act (CALEA). The act is part of a wiretapping law passed in 1994 that requires telecoms carriers to provide law enforcement with a backdoor in their systems to monitor telephone and broadband communications.

Gogo states in the letter to the Federal Communications Commission that it added new capabilities to its service that go beyond CALEA, at the behest of law enforcement agencies.

“In designing its existing network, Gogo worked closely with law enforcement to incorporate functionalities and protections that would serve public safety and national security interests,” Gogo attorney Karis Hastings wrote in the leaked letter, which dates from 2012. He did not elaborate as to the nature of the changes, but said Gogo “worked with federal agencies to reach agreement regarding a set of additional capabilities to accommodate law enforcement interests.”

Gogo, which provides WiFi services to the biggest US airlines, are not the only ones to adapt their services to enable spying. Panasonic Avionics also added “additional functionality” to their services as per an agreement with US law enforcement, according to a report published in December.

The deals with security services have civil liberties organizations up in arms. They have condemned the WiFi providers’ deals with authorities as scandalous.

“Having ISPs [now] that say that CALEA isn’t enough, we’re going to be even more intrusive in what we collect on people is, honestly, scandalous,” Peter Eckersley, of the Electronic Frontier Foundation, told Wired.

The powers of the National Security Agency and other US law enforcement agencies have come under harsh criticism since the data leaks from whistleblower Edward Snowden revealed the extent to which they monitor citizens’ communications. In particular, critics have taken issue with the NSA’s mass, indiscriminate gathering of metadata which has been described as “almost Orwellian in nature” and a violation of the Fourth Amendment.

Judge Richard Leon of the US District Court for the District of Columbia has filed a lawsuit against the US agency and is pushing to have the case heard in the US Supreme Court. Last week the Supreme Court said that Leon would have to wait for a ruling from the lower court before his case could be heard.

Since the NSA scandal blew up last year, prompting widespread public anger in the US and internationally at the violation of privacy rights, President Barack Obama’s administration has reluctantly taken some modest steps to curb the powers of the agency.

At the beginning of this year, Obama announced that the NSA would no longer be able to monitor the personal communications of world leaders. In addition, last month Obama formally proposed to end the NSA’s bulk data collection, proposing legislation that would oblige the agency to get a court order to access information through telecoms companies.