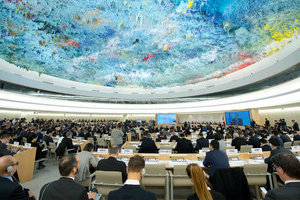 The resolution builds on the UN's previous statements on digital rights, reaffirming the organization's stance that "the same rights people have offline must also be protected online," in particular the freedom of expression covered under article 19 of the Universal Declaration of Human Rights.

The resolution was passed by consensus last Friday, but was opposed by a minority of authoritarian regimes including Russia, China, and Saudi Arabia, as well as democracies like South Africa and India. These nations called for the UN to delete a passage in the resolution that "condemns unequivocally measures to intentionally prevent or disrupt access to our dissemination of information online."

Resolutions like this are not legally enforceable, but put pressure on governments and give credence to the actions of digital rights advocates around the world. The UN's decision to target internet shutdowns is particularly relevant, as governments have started freely using this method as a means of controlling citizens in what appear to be even minor matters.

Just in the last month social media sites have been throttled in Turkey after a terrorist attacks on Istanbul's airport; mobile internet has been shut down in Bahrain and India following local protests; and social media has been blocked in Algeria simply to stop students cheating on school tests. According to digital rights group Access Now, there were at least 15 internet shutdowns in 2015 around the world, and at least 20 just in 2016 so far.

Thomas Hughes, the executive director of Article 19, a charity that defends freedom of expression, welcomed the resolution, saying it was a "much-needed response" to increased pressure on online freedoms. In a press statement, Hughes said: "From impunity for the killings of bloggers to laws criminalizing legitimate dissent on social media, basic human rights principles are being disregarded to impose greater controls over the information we see and share online."