Almost six million fraud and cyber crimes were committed last year in England and Wales, the Office for National Statistics has said. 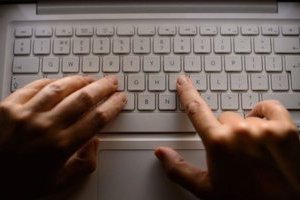 It estimated there were two million computer misuse offences and 3.8 million fraud offences in the 12 months to the end of March - suggesting fraud is the most common type of crime. Most related to bank account fraud.

It is the first time fraud questions have been added to the official Crime Survey for England and Wales. The figures are separate from the ONS headline estimate that a total of 6.3 million crimes were perpetrated against adults in the year to March - a 6% fall in the number of crimes compared to the previous year. The Crime Survey for England and Wales asks people about crime they have experienced and includes offences not reported to police.

John Flatley, of the ONS, said: "This is the first time we have published official estimates of fraud and computer misuse from our victimisation survey. "Together, these offences are similar in magnitude to the existing headline figures covering all other crime survey offences. "However, it would be wrong to conclude that actual crime levels have doubled, since the survey previously did not cover these offences."

The most common types of fraud experienced were bank and credit account fraud, with 2.5 million incidents, followed by "non-investment" fraud, such as scams related to online shopping, the ONS said. For years fraud was thought of as a "victimless" crime which mainly affected businesses and banks. It wasn't part of the official crime survey and wasn't seen as a priority by police and politicians.

But the widespread use of computers, laptops and smart-phones to facilitate fraud has changed all that - and the survey is finally catching up. Its findings are startling: we are more likely to be a victim of fraud than any other type of crime, with one in 10 adults defrauded in the past 12 months.

Unlike other crime types, such as robbery, people in rural parts were more vulnerable to fraud than city-dwellers; middle-aged adults were more likely to be victims than those in other age groups; and people in managerial and professional jobs were at greater risk than manual workers, students and the unemployed. Fraud is one of the oldest crimes - but these figures have put the problem firmly on the map.

Of the two million computer misuse incidents, 1.4 million involved a computer or internet-enabled device being infected with a virus. The remaining 0.6 million crimes related to "unauthorised access to personal information" - such as hacking. In October, the ONS estimated there were more five million incidents of fraud in England and Wales in a year, but these figures were based on a "large-scale field trial" carried out between May and August 2015 to develop the questions added to the survey.

The ONS said that the fraud questions were only added to the crime survey from October 2015 and the data was based on interviews conducted during the second half of the survey year. The data had then been "grossed up" to provide an estimate covering the entire survey year, it said.

The College of Policing's head of research, Nerys Thomas, said: "There are dozens of ways the internet can be used to exploit and defraud people, and officers need to be equipped with the skills to tackle these crimes. "Last year, we launched the second stage of our cybercrime training, which focuses on developing the awareness and skills of frontline officers, as well as more specialised investigators."

Policing minister Brandon Lewis said: "Fraud and cyber offences are not a new threat and the government has been working to get ahead of the game, committing to spend £1.9bn on cybersecurity and cybercrime over the next five years." He said they were "offences which we have always known were happening but were previously unable to quantify". "Having an accurate national picture will be crucial to inform future action," he said.