US defends mass surveillance at UN 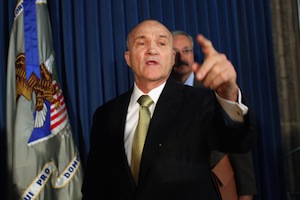 The US is one of 74 signatories that has ratified the International Covenant on Civil and Political Rights, and as a result must be scrutinized every five years by an 18-person UN panel that focuses particularly on allegations of human rights abuses.

That process involved a question-and-answer session between the UN committee members and representatives for the US last week, and the disclosures about the NSA’s broad surveillance abilities ended up being brought squarely into the discussion.

In a statement released by the UNHRC on Friday, the group said “Committee Members raised concerns regarding the United States’ unilateral interpretation of the scope of applicability of the Covenant, which in some cases contradicted the views of the Committee: if all States Parties shared this interpretation there would be no protection of rights at all, an Expert said.”

“Committee Members also expressed concerns regarding the lack of oversight over intelligence activities and the lack of remedies for the victims of United States’ extraterritorial activities,” the UN noted. When it came time to counter allegations of unlawful spying, though, American representatives once again argued that the NSA’s practices are far from foul.

“All United States activities, including its intelligence surveillance activities and its activities in the context of armed conflict with Al-Qaeda, were carried out in strict compliance with domestic and international law. These activities were also subject to extensive domestic oversight,” the American delegates insisted, the committee’s statement reads.

According to The Guardian, senior US Department of Justice attorney Bruce Swartz told the committee that the data in question was collected “only for a valid purpose – foreign intelligence and counter-terrorism,” and that the actual collection of that information is “lawful under the law of the United States” and “subject to rigorous . . . multi-layered oversight.”

On their part, the UN asked Swartz and his colleagues if “the National Security Agency’s surveillance [was] proportional to the aims of achieving national security?” and if the collection of metadata as evidenced by one NSA document disclosed last year was even “necessary.”

“Is NSA surveillance to achieve legitimate objectives? Is it proportionate to those aims?” Yuji Iwasawa, a Japanese international lawyer who sits on the committee, asked of America’s representatives. Those programs, the US responded, “respected the law of the United States and were transparent in many aspects.”

“Intelligence data collection was only undertaken for valid purposes, and data collection did not intend to change or to challenge freedom of expression, and did not seek to discriminate on any ground. Oversight was in place at multiple levels, including in a variety of contexts, including from the Executive, Congress and the judiciary,” they added, noting that Pres. Barack Obama himself has recently “demanded further safeguards to Congress.”

“The collection does not intend to, or have the effect of, changing or challenging freedom of expression. Nor is it designed to or does it have the effect of disadvantaging people based on their ethnicity, on their race, on their gender, on their sexual orientation,” Swartz added, according to AFP.

The American Civil Liberties Union, however, said that the US shouldn’t be quick to condone Pres. Obama’s efforts. Ed Pilkington from The Guardian reported that the ACLU was one of a handful of non-governmental groups that traveled to Switzerland for last week’s hearing, and ahead of time recirculated a paper that the journalist said “casts doubts on efforts by the Obama administration to reform the NSA’s data-gathering techniques.

According to Pilkington, The ACLU points out that the reforms that Obama has discussed are “yet to be implemented, and in any event, fail to satisfy the requirements of Article 17 of the ICCPR. Rather than placing meaningful limits on the NSA’s worldwide spying activities, President Obama has cemented the role of bulk collection of global communications in NSA’s mission.”

Jamil Dakwar, the director of the ACLU’s human rights program, told the AFP that the NSA issue was only one of several that his organization saw problematic. “The US shortcomings are being highlighted by the committee’s sharp questions on everything from drone killings and NSA surveillance to the humane treatment of immigrants and prisoners, especially discrimination against minorities,” he said. “This review provides the United States an opportunity to reverse course, remedy rights violations, and take concrete actions like declassifying the Senate report on CIA torture.”

Andrea Prasow, the senior National Security Council and advocate at the Human Rights Watch, added in a statement of her own that “The US review is the perfect time for the Human Rights Committee to make clear that mass communications surveillance — whether against a country’s own citizens or another country’s — violates basic rights.”

Swartz of the DOJ was joined by members of the Departments of State, Justice, Defense, Health and Human Services, Homeland Security and Interior, as well as the permanent mission of the United States to the United Nations Office at Geneva, the Mayor of Salt Lake City, Utah, the attorney general of the state of Mississippi and a contract attorney from Los Angeles. The committee will use last week’s discussion to produce a non-binding final report to be released in the future intended to encourage the US to make policy changes as the UN seems fit.