Apple is working on smart glasses

Apple Inc. is weighing an expansion into digital glasses, a risky but potentially lucrative area of wearable computing, according to people familiar with the matter. 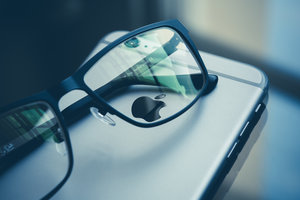 While still in an exploration phase, the device would connect wirelessly to iPhones, show images and other information in the wearer’s field of vision, and may use augmented reality, the people said. They asked not to be identified speaking about a secret project.

Apple has talked about its glasses project with potential suppliers, according to people familiar with those discussions. The company has ordered small quantities of near-eye displays from one supplier for testing, the people said. Apple hasn’t ordered enough components so far to indicate imminent mass-production, one of the people added. Should Apple ultimately decide to proceed with the device, it would be introduced in 2018 at the earliest, another person said. The Cupertino, California-based company tests many different products and is known to pivot, pause, or cancel projects without disclosing them. Apple spokeswoman Trudy Muller declined to comment.

Chief Executive Officer Tim Cook is under pressure to deliver new products amid slowing sales of the iPhone, which accounts for two-thirds of Apple’s revenue. In July, he expressed enthusiasm for augmented reality after the rise of Pokemon Go, a location-based game that uses the technology. AR, as it’s known, adds images and other digital information to people’s view of the real world, while virtual reality completely surrounds them with a computer-generated environment.

The glasses may be Apple’s first hardware product targeted directly at AR, one of the people said. Cook has beefed up AR capabilities through acquisitions. In 2013, Apple bought PrimeSense, which developed motion-sensing technology in Microsoft Corp.’s Kinect gaming system. Purchases of software startups in the field, Metaio Inc. and Flyby Media Inc., followed in 2015 and 2016.

“AR can be really great, and we have been and continue to invest a lot in this,” Cook said in a July 26 conference call with analysts. “We are high on AR for the long run. We think there are great things for customers and a great commercial opportunity.” Apple has AR patents for things like street view in mapping apps. It was also awarded patents for smart glasses that make use of full-fledged virtual reality. Apple is unlikely to leverage VR in a mass-consumer product, Cook suggested in October.

"I can’t imagine everyone in here getting in an enclosed VR experience while you’re sitting in here with me, but I could imagine everyone in here in an AR experience right now," he said during an onstage discussion in Utah. Apple’s challenge is fitting all the technology needed into a useful pair of internet-connected glasses that are small and sleek enough for regular people to wear. Google’s attempt to develop internet-connected eye wear flopped in part because its tiny battery ran out quickly. Google Glass, as it was called, also suffered a privacy backlash and poor public perception of its external design.

After that disappointment, technology companies largely turned their immediate focus to VR and away from AR. Google recently introduced a VR headset alongside its Pixel smartphone, and Facebook Inc.’s Oculus VR unit has teamed up with Samsung Electronics Co. on a similar headset. Microsoft has the most public AR offering. Its HoloLens product shows holographic images in a user’s field of vision.

Apple’s effort may be more difficult because the chips, batteries and other components that will be available in a year or two may still not be small enough and powerful enough to build slim glasses capable of handling compelling AR experiences. However, given time, technical challenges may play to Apple’s strengths. The company specializes in turning technology that others have struggled with into easy-to-use devices for the masses. For example, Apple simplified fingerprint technology into an unlocking mechanism for the iPhone and took touch screens mainstream with the original iPhone.

Augmented reality “is going to take a while, because there are some really hard technology challenges there, but it will happen in a big way, and we will wonder when it does, how we ever lived without it,” Cook said last month. “Like we wonder how we lived without our phone today."