An ad-fraud-detection firm claims that a Russian hacking operation has been defrauding online advertisers in the U.S. of more than $3 million a day. 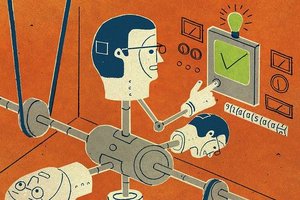 In a research report published Tuesday, White Ops said it had discovered a sophisticated online ad-fraud operation it calls “Methbot.” “We’ve never seen anything like this. Methbot elevates ad fraud to a whole new level of sophistication and scale,” said Michael Tiffany, co-founder and CEO of White Ops.

According to White Ops, the Methbot operation has used hundreds of servers in the U.S. and the Netherlands to create nonhuman or “bot” traffic, and directed that traffic to load webpages featuring video ads from major advertisers, mostly ones based in the US. The bot operators also created fake webpages designed to trick advertisers into believing their ads were appearing on major websites including Fox News, The Economist, ESPN, CBS Sports, The Wall Street Journal and others.

Nonhuman traffic is bad news for advertisers because it can result in them wasting money on ads that are shown to computer programs, instead of real people capable of purchasing their products or services. Owing to the complicated automated advertising systems now commonplace in online media, it is often difficult for marketers to know exactly what they are buying.

A study from White Ops and the Association of National Advertisers earlier this year estimated that advertisers wasted at least $7 billion a year on online ads served to fraudulent traffic. White Ops said it initially spotted the scam in September 2015 and quietly monitored its growth.

“The most expensive advertising on the internet is full-sized video ads, on name-brand sites,” Mr. Tiffany said, potentially making the Methbot scam more lucrative than others. White Ops said multiple advertising-technology companies helped bring marketers’ ads to Methbot’s fake web traffic, but that it couldn't see all the different methods Methbot was using to sell its fake ad space.

According to Mr. Tiffany, the company is publishing its findings to help marketers and ad tech platforms address the problem, alongside a list of the impostor website domains to aid in that process. “At this point the Methbot operation has become so embedded in the layers of the advertising ecosystem, the only way to shut it down is to make the details public to help affected parties take action,” the report said.

White Ops itself also sells software products designed to help marketers, publishers and ad tech platforms identify fraudulent traffic and to prevent their advertising from being loaded by it. The Methbot research and methodology wasn’t vetted by a third party, but the data and assumptions were reviewed by industry partners and security researchers, a spokesman for the company said. Mr. Tiffany said there is no evidence Methbot is in any way linked with the computer-hacking operation that targeted the Democratic National Committee earlier this year.