Amid high-profile political cyberattacks, Americans are losing confidence in their own cybersecurity. 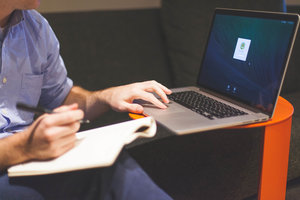 Just under half of Americans — 49 percent — think their personal information is less secure than it was five years ago, according to a new report from the Pew Research Center. They're only slightly more optimistic about the government's abilities.

Twenty-eight percent of Americans are "not confident at all" that the federal government can keep their personal information safe. And when the Democratic National Committee is hacked and Yahoo says 1 billion of its users were affected by a hack, who can blame them? “Despite their broad concerns about the safety of their personal information and their long-standing sense that they have lost control over their personal data, relatively few Americans are engaging in the digital best practices recommended by experts in the field,” report co-author Kenneth Olmstead said in a statement.

“Even those users who are highly educated – or who themselves have been victim to some type of personal data breach – tend to adopt a ‘path of least resistance’ approach to managing their online passwords and accounts.” The survey of 1,040 adults, conducted in spring 2016, found that 64 percent of Americans had personally experienced a major data breach. For 16 percent of respondents, that meant that someone took over their email accounts. For 13 percent, it was social media accounts.

That might be because Americans aren't taking the necessary steps to protect their information. Thirty-nine percent of respondents said they used the same or similar passwords across their online accounts. Forty-one percent said they had shared one of their passwords with a friend or family member.

The survey asked about seven different types of identity or data theft that Americans might be exposed to and found that several are particularly widespread. Some 41% of Americans have learned they were the victims of a data breach by seeing fraudulent charges on their credit or debit cards. Around one-third (35%) of Americans have received notices that some sort of sensitive personal information – like an account number – had been compromised, and 15% have received notices that their social security number, specifically, had potentially fallen into the wrong hands.

More than one-quarter of smartphone owners do not use a screen lock, and many fail to regularly update the apps or operating system on their phones. As smartphones have become increasingly prevalent – and as users engage in a wide range of sensitive behaviors on their phones – these devices have become the latest front in the battle over digital security.

Along with users’ passwords and the physical devices they carry, the networks their devices are connected to offer an additional avenue for potential cyberattacks. Public Wi-Fi networks (such as those in cafes, libraries or other public spaces) are an especially common target for hackers. Just over half of internet users utilize public Wi-Fi networks, including for tasks like online banking or e-commerce.