Criminal groups are becoming more and more sophisticated, especially when it comes to the hi-tech devices they put to use. 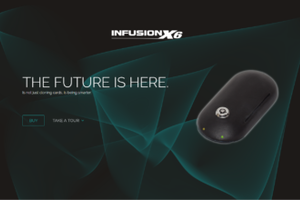 One of these groups, called The CC Buddies, has recently launched a new contactless card cloning device and it's not even bothering to hide its business on the dark web anymore. "We're happy to announce the Infusion X6 is out," reads an email sent out by the group.

The device can be used to "capture bank cards" up to 15 centimeters away and to save up to 21 cards per second. That's a clear upgrade from the Infusion X5 which they were selling last summer, which could copy up to 15 bank cards per second. "This is great in big crowds, the X6 won't waste time and it won't miss an opportunity to snap the next card!" reads the group's marketing strategy. Another change they implemented on the device is related to the design. The newer model is smaller and has a better shape that can be attached to a wrist dock to hide under the sleeve.

The device has a locking system, so if the authorities catch the criminals, they can encrypt the data stored on the device to make it inaccessible. X6 was created to copy data from the radio chip found in modern contactless bank cards. The data is then stored on the device's internal storage and it can be transferred to a PC at a later time via the USB cable it comes with.

It can be used to collect complete data sets, including the number and expiration date, as well as any other data held by the RFID chip, such as the individual's personal details. When the credit card data is picked up, the device encrypts the data, which is later decrypted by the software provided by the CC Buddies. The criminals can then start creating fake debit cards by using blank plastic cards, something that the CC Buddies also provide.

The Infusion X6 is being sold for 1.5 Bitcoins, which is roughly $1,700 at current rates. There are several other packages available that can take the price up to 1.6 Bitcoins for extra cards. It's interesting that this particular gang of criminals has chosen to take its business to the clearnet, but there are many others doing the very same thing on the dark web.