Several users have complained that ads served through Microsoft's Skype app are serving malicious downloads, which if opened, can trigger ransomware. 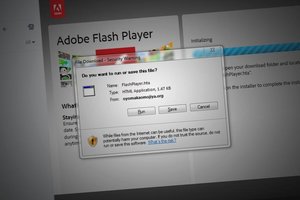 News of the issue came from a Reddit thread, in which the original poster said that Skype's home screen -- the first screen that shows up on consumer versions of the software -- was pushing a fake, malicious ad, purporting to be a critical update for the Flash web plug-in.

According to the thread, the ad triggered a download of an HTML application, designed to look like a legitimate app. The app, when opened, would download a malicious payload, which locks the user's computer and encrypts its files for ransom. Many other users in the past few days have also complained of similar issues with Skype's in-app ads, with at least two other people having the same "fake Flash" ad into Thursday. Knowing it was malicious, the user didn't run the app but instead deconstructed and posted the code.

We asked several experts to deconstruct the code and explain how it works. The "fake Flash" ad, designed to target Windows machines, pushed a download, which when opened would trigger obfuscated JavaScript. The code starts a new command line, then deletes the application that the user just opened, and runs a PowerShell command, which then downloads a JavaScript Encoded Script (JSE) from a domain that no longer exists, likely one of many disposable domains used to hide an attacker's operations.

All of these steps, one after another, help the malware evade detection by antivirus tools. "This is a what's generally called a 'two stage' dropper'," said Ali-Reza Anghaie, co-founder of cybersecurity firm Phobos Group, in an email. "It's effectively the utility component of the malware that then decides what else to do based on the command and control it connects to."

But because the domain no longer exists, it's impossible to download the payload to determine exactly what it would've been. Anghaie said that in "99 percent of cases this is going to be ransomware." All signs point to this "fake Flash" ad as a spin off of a recent Locky ransomware campaign that also delivers a Kovter trojan, which remains on the system to carry out click-fraud and malvertising campaigns. Locky, which became one of the most notorious ransomware threats last year, uses a similar malicious JavaScript-based attack to lock computers, which execute directly on Windows without the help of any other app.

A similar sample of the malware delivered by the "fake Flash" ad was uploaded to IBM's X-Force, a threat intelligence sharing site. Although the payload is downloaded from another disposable domain, the malware matches the pattern of the web address used in this attack. It's not known how many domains are used in this campaign, but it's thought that each domain is registered and deregistered quickly to keep the attacker from paying for the domain, and to prevent researchers from digging around.

It's not the first time Skype has been hit by an ad-based attack. Experts reported in 2015 that malicious ads seen in the Skype client would push users to fake Java or Flash ads. And similar reports of attacks from the Angler exploit kit last year pointed from one ad platform, which had let through a malicious ad campaign.

In a brief statement sent more than a day after we asked for comment, Microsoft said the rogue malware-pushing ad found within Skype was a "social engineering" effort, and deflected any responsibility for the issue. "We're aware of a social engineering technique that could be used to direct some customers to a malicious website," said the spokesperson. "We continue to encourage customers to exercise caution when opening unsolicited attachments and links from both known and unknown sources and install and regularly update antivirus software."