US senators rail against intelligence disclosures over NSA practices

The bipartisan leaders of a powerful Senate committee questioned the truthfulness of the US intelligence community in a heated Wednesday morning hearing as officials conceded that their controversial bulk phone records collection of millions of Americans was not "the most important tool" – contradicting statements they previously gave to Congress. 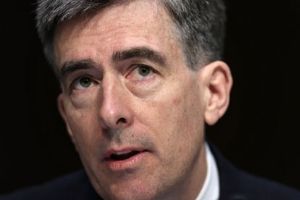 Two senators said they now planned to introduce new legislation before the August recess that would significantly transform the transparency and oversight of the bulk surveillance program. The chairman of the committee has already advocated for ending the bulk phone records collection and plans his own legislative push to shut it down.

Just before the hearing began, the US director of national intelligence declassified and released documents shedding more light on how the bulk surveillance occurs. Senator Al Franken, a Minnesota Democrat, denounced the move as "ad hoc transparency."

Patrick Leahy, a Vermont Democrat and chairman of the Senate judiciary committee, said: "We need straightforward answers, and I'm concerned we're not getting them."

Leahy, joined by ranking Republican Chuck Grassley of Iowa, criticised director of national intelligence James Clapper for making untruthful statements to Congress in March about the bulk phone records collection on Americans, and NSA director Keith Alexander for overstating the usefulness of that collection for stopping terrorist attacks.

"Nothing can excuse this kind of behavior from a senior administration official," Grassley said. "Especially on a matter of such importance."

Clapper was not at the hearing. Instead, NSA deputy director John Inglis, deputy attorney general James Cole and FBI deputy director Sean Joyce strongly defended the bulk phone records collection. "We must have the dots to connect the dots," Joyce said.

Dianne Feinstein, a judiciary committee member who also chairs the Senate intelligence committee, defended the officials. "We would place the nation in jeopardy if we were to end these two programs," she said.

But Leahy pressed the intelligence and law enforcement officials to detail how many terrorist plots the bulk phone records collection on millions of Americans, first disclosed by the Guardian thanks to whistleblower Edward Snowden, had disrupted. "That's a very difficult question to answer," Inglis testified. "That's not how these programs work."

Yet two of the three documents declassified by Clapper on Wednesday claim the phone records database was critical to stopping terrorist attacks. The documents, four-page summaries of the bulk collection programmes provided to Congress in 2009 and 2011 before key votes on surveillance laws, state that the bulk phone records collection and a separate internet communications collection effort "significantly strengthen the intelligence community's early warning system for the detection of terrorists and discovery of plots against the homeland."

The NSA has previously claimed that 54 terrorist plots had been disrupted "over the lifetime" of the bulk phone records collection and the separate program collecting the internet habits and communications of people believed to be non-Americans. On Wednesday, Inglis said that at most one plot might have been disrupted by the bulk phone records collection alone. "There is an example that comes close to a 'but for' example," Inglis said.

"Each tool plays a different role," Joyce said. Discussing the phone records bulk collection, he said: "I'm not saying it's the most important tool."

Senators Wyden and Mark Udall, members of the intelligence committee, have repeatedly said that there is no evidence that the controversial bulk phone records collection has disrupted any terrorist plots. They criticized intelligence officials for conflating to Congress the value of the phone records database and the internet communications surveillance. Last week, the House of Representatives came within seven votes of defunding the program.

"We are open to re-evaluating this program in ways that creates greater public confidence and trust," testified Robert Litt, the top lawyer for the US intelligence community.

After the hearing, Wyden said he remained deeply concerned. "On issue after issue, too many of the leaders in the intelligence community have not just kept the Congress in the dark," he said in a CNN interview. "Congress have been given inaccurate statements and in effect been actively misled."

Wyden and Udall argued Tuesday night on the Senate floor for ending the bulk phone records collection. They accused intelligence officials, including Clapper, of deceiving Congress about the extent of abuses of NSA's databases, which Clapper described as accidental.

The White House, which condemned disclosures in the Guardian on Wednesday about another NSA program, said Barack Obama would meet personally with a group of Democratic and Republican members of Congress on Thursday to discuss "key programs under the Foreign Intelligence Surveillance Act".

Before the Wednesday hearing, the first in the Senate on the bulk NSA surveillance, Clapper declassified new documents about the programs. One of them was a heavily redacted April order from the Fisa court on the rules for NSA to handle the bulk phone records it collects, complementing the one published by the Guardian in June.

The order obliges the NSA to ensure that it has a "reasonable articulable suspicion" before making any query of the phone records database. Judges are not required to certify that the NSA has met that standard before each search.

The order also authorizes the NSA's "technical personnel" to query the database using terms that fall outside the definition of reasonable articulable suspicion, "but the results of any such queries will not be used for intelligence analysis purposes".

A footnote in the document specifies that "technical personnel responsible for NSA's corporate infrastructure and the transmission of BR metadata" may handle the phone records data without the "special training" in court-ordered restrictions undergone by NSA intelligence analysts. They do not require "reasonable articulable suspicion" to do so.

Two senators said they would introduce legislation as early as Thursday that would change the transparency rules and the structure of Court oversight around the bulk surveillance.

Franken said he would introduce a bill forcing the NSA to disclose how many Americans have had their data collected, and how many Americans' data the NSA has analysed once placed in its databases. Last year, the NSA denied it had any way of estimating that number, and told Wyden that providing it would violate Americans' privacy.

Documents published by the Guardian that Snowden provided, however, revealed an NSA analytic tool called Boundless Informant that displays the country of origin of collected communications.

Senator Richard Blumenthal, a Connecticut Democrat, said he would also submit a second bill on Thursday to significantly reform the Fisa court process, including the introduction of security-cleared special advocates, to challenge the position of the administration.

He said the Fisa court needed to become more adversarial. "I think the current design of the Fisa courts is stacked against the protection of our civil liberties and can be improved and enhanced, without sacrificing either speed or security."