NSA statement does not deny 'spying' on members of Congress

The National Security Agency on Saturday released a statement in answer to questions from a senator about whether it “has spied, or is … currently spying, on members of Congress or other American elected officials”, in which it did not deny collecting communications from legislators of the US Congress to whom it says it is accountable. 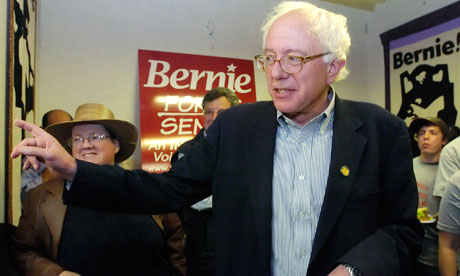 In a letter dated 3 January, Senator Bernie Sanders of Vermont defined “spying” as “gathering metadata on calls made from official or personal phones, content from websites visited or emails sent, or collecting any other data from a third party not made available to the general public in the regular course of business”.

The agency has been at the centre of political controversy since a former contractor, Edward Snowden, released thousands of documents on its activities to media outlets including the Guardian.

In its statement, which comes as the NSA gears up for a make-or-break legislative battle over the scope of its surveillance powers, the agency pointed to “privacy protections” which it says it keeps on all Americans' phone records.

The statement read: “NSA’s authorities to collect signals intelligence data include procedures that protect the privacy of US persons. Such protections are built into and cut across the entire process. Members of Congress have the same privacy protections as all US persons. NSA is fully committed to transparency with Congress. Our interaction with Congress has been extensive both before and since the media disclosures began last June.

“We are reviewing Senator Sanders’s letter now, and we will continue to work to ensure that all members of Congress, including Senator Sanders, have information about NSA’s mission, authorities, and programs to fully inform the discharge of their duties.”

Soon after Sanders' letter was published, the director of national intelligence, James Clapper, announced that the Foreign Intelligence Surveillance (Fisa) Court, the body which exists to provide government oversight of NSA surveillance activities, had renewed the domestic phone records collection order for another 90 days.

On Saturday, the New York Times published a letter from Robert Litt, in which the general counsel for the Office of National Intelligence denied allegations that Clapper lied to Congress in March, when questioned about NSA domestic surveillance.

Last month, two federal judges issued contradictory verdicts on whether such NSA surveillance was constitutional. Judge Richard Leon said it was not constitutional; Judge William Pauley said that it was.